US President Donald Trump called Germany’s trade and spending policies “very bad” – intensifying a row between the longtime allies and immediately earning himself the moniker “destroyer of Western values” from a leading German politician.

As the war of words on Tuesday threatened to spin out of control, Merkel and other senior German politicians stressed the importance of Germany’s Atlantic ties, with Foreign Minister Sigmar Gabriel suggesting the spat was just a rough patch.

Trump took to Twitter early in the day in the United States to attack Germany, a day after Chancellor Angela Merkel ramped up her doubts about the reliability of Washington as an ally.

“We have a MASSIVE trade deficit with Germany, plus they pay FAR LESS than they should on NATO & military. Very bad for U.S. This will change,” Trump tweeted.

Later in the day, Trump’s spokesman and the US ambassador to the United Nations said there were no problems in relations with Merkel or NATO.

The tit-for-tat dispute escalated rapidly after Trump, at back-to-back summits last week, criticised major NATO allies over their military spending and refused to endorse a global climate change accord.

Trump said he will give his verdict on the Paris accord later this week and has warned Washington may pull out of a pact that European leaders see as the last best hope to slow global warming.

On Sunday, Merkel showed the gravity of her concern about Washington’s dependability under Trump when she warned at an election campaign event in a packed Bavarian beer tent, that the times when Europe could fully rely on others were “over to a certain extent”.

Those comments, which caused shock in Washington, vented Europe’s frustration with Trump on climate policy in particular. And while German politicians sided with Merkel, Foreign Minister Sigmar Gabriel signalled it was time for cooler heads to prevail.

“The United States are older and bigger than the current conflict,” he said, adding relations would improve. “It is inappropriate that we are now communicating with each other between a beer tent and Twitter,” he said in Berlin.

Martin Schulz, leader of Gabriel’s centre-left Social Democrats, was less emollient earlier in the day when he told reporters Trump was “the destroyer of all Western values”. He added the US president was undermining the peaceful cooperation of nations based on mutual respect and tolerance.

In Rome, Italian Prime Minister Paolo Gentiloni said he agreed with Merkel that Europe needed to forge its own path.

“This takes nothing away from the importance of our trans-Atlantic ties and our alliance with the United States. But the importance we put on these ties cannot mean that we abandon fundamental principles such as our commitment to fight climate change and in favour of open societies and free trade,” he said.

In Washington, Trump administration officials on Tuesday appeared to try to soften the message underlying Trump’s tweet with comments emphasising the importance of US-European ties.

“They get along very well. He has a lot of respect for her… And he views not just Germany but the rest of Europe as an important American ally.”

Nikki Haley, the US ambassador to the United Nations, said repeatedly in an interview the United States would support its NATO allies.

On Merkel’s apparent criticism of Trump, Haley said: “I think there’s obviously some differences of opinion between the two of them, but at the same time I know what we believe in NATO and how strongly we believe about those allies and we’re going to continue to do that.” 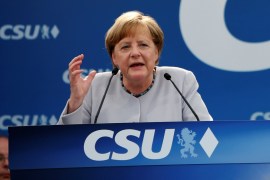 Merkel says EU cannot ‘fully’ rely on the US or UK

‘We Europeans must really take our destiny into our own hands’ says the German chancellor, the day after a G7 summit. 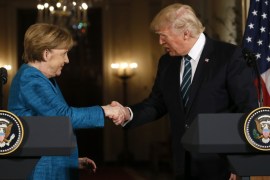 Two leaders discuss the fight against ISIL, NATO and Ukraine among other topics.