Media and rights groups have demanded the Mexican government catch the killers of the fifth and most high-profile journalist murdered this year in the country.

Javier Valdez, 50, was shot dead in broad daylight on Monday in northwestern Sinaloa state. The awarding-winning journalist was one of the most prominent reporters on Mexico’s deadly “drug war”.

On Tuesday, the front pages of the country’s major newspapers carried pictures of Valdez as journalists demonstrated in the centre of the capital, Mexico City.

President Enrique Pena Nieto said he had ordered “an investigation of this outrageous crime”. He vowed to defend press freedom, “fundamental for our democracy”.

Press rights group Articulo 19 said that was the first time Pena Nieto had reacted publicly to one of the recent wave of journalists’ killings, which they consider a sign of rising pressure on the president.

But the killing fanned a wave of anger at the authorities, with rights groups saying corrupt officials are preventing journalists’ killers from being punished.

“How long will there be killings without pity and with impunity?” said Valdez’s own weekly publication, Riodoce.

“Murderous impunity,” ran the headline of an editorial in La Jornada, the national daily for which Valdez worked as Sinaloa correspondent.

Just hours after Valdez’s assassination on Monday, in Autlan, gunmen opened fire on Sonia Cordova, an executive at the Semanario Costeno weekly magazine, and her son.

Cordova was wounded and taken to hospital and her adult son was killed in the attack, the state prosecutor’s office said.

In a 2017 report titled “No Excuse”, journalist Adela Navarro Bello wrote for the New-York based Committee to Protect Journalists that “covering corruption in Mexico means living with impunity“.

Valdez was due to be cremated on Tuesday, his family said.

Journalists’ unions said they planned demonstrations in homage to Valdez, including one outside government headquarters in Mexico City and one in his home town of Culiacan, where he was shot.

Some media in Sinaloa cancelled their Tuesday editions in protest.

“This wave of violence shows the state of emergency in which Mexican journalists are living,” said Emmanuel Colombie, Latin American director of Reporters Without Borders.

“The Mexican government must take action proportionate to the seriousness of the situation and strengthen protection for journalists as soon as possible.”

Numerous media and human rights organisations including Amnesty International have called for an impartial investigation.

They accused the authorities of failing to prosecute those who kill journalists covering the drug gangs in broad daylight, sometimes in front of their families.

Articulo 19 says 105 journalists have been murdered and a further 23 have disappeared since 2000.

Of those cases, 99.7 percent remain unsolved, meaning the culprits have gone unpunished, it says. 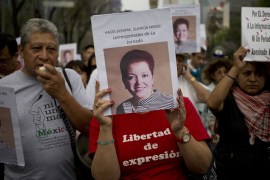 Mexico’s journalists face intimidation and assassinations, but is the media business in crisis, too?