We recently reported on the rare sight of a subtropical depression forming in the Atlantic Basin, long before the official hurricane season, which does not begin until June 1.

Well, not only did this subtropical depression persist despite chilly ocean temperatures of just 20C, it actually formed into a tropical storm on April 20.

Although it was short-lived, the storm was given the moniker Arlene, making it the first named storm of 2017.

It also became just the second tropical storm on record in April, since satellite technology became available in the 1960s (the first such storm was Ana in 2003).

In addition, Arlene was the most northerly forming storm this early in the year.

Although Arlene was located in a relatively isolated part of the Atlantic basin, between Bermuda and the Azores, it was a hazard to shipping in the region, with wave heights analysed at 13 metres by NOAA’s Ocean Prediction Center.

Arlene was downgraded to an extratropical storm sometime after the last advisory from the National Hurricane Center at 09:00 GMT on Friday.

On the face of it, the Atlantic hurricane season has exhibited increasingly erratic behaviour in recent years.

In 2014, two hurricanes, Fay and Gonzalo, hit Bermuda within the space of a week.

The year 2013 was notable for an almost total lack of hurricane activity, while 2012 will be remembered for Hurricane Sandy, which was one of the largest hurricanes on record, according to its wind field. Sandy was then swept up into a frontal system which brought damaging winds and destructive coastal surges to the eastern seaboard of the United States.

The forecast for 2017 remains for a season of slightly below average activity, but with hurricanes, you can never be sure. 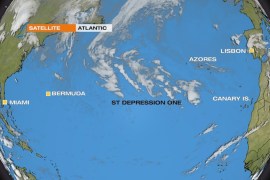 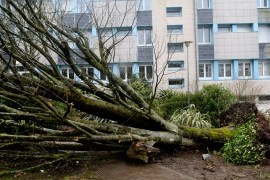 Many parts of the country hit by torrential rain and damaging winds.