Protesters in Venezuela have renewed nationwide anti-government rallies to pressure President Nicolas Maduro to step down, a day after three people were killed in similar demonstrations dubbed by the opposition as the “mother of all marches”.

Crowds on Thursday were smaller than the hundreds of thousands of people who flooded the streets of the capital, Caracas, on Wednesday, holding rival rallies amid increasing tensions over the oil-rich country’s political crisis.

“Despite the violence that we are witnessing in the country, this calling is important. We are fighting for our rights, we are suffering from food shortages, there is poverty, our people are dying in the hospitals, we can’t find antibiotics, it’s important to be out,” she added.

Anti-government demonstrators accuse Maduro of eroding democracy and plunging the economy into chaos.

Government supporters, who also took to the streets on Wednesday at the urging of the president, dismiss the opposition marches as violent efforts to overthrow Maduro with the backing of ideological adversaries in the United States.

“We are protesting, because we are in disagreement with the government of Nicolas Maduro. We are experiencing a serious crisis that is suffocating us,” journalist Leonardo Bruzual told Al Jazeera.

“For those of us who work and earn a normal salary, we can barely eat. We literally have young boys and girls, kids, elderly, eating from the garbage. We want a change in the government. ”

Riot police on Thursday fired tear gas to break up scores of protesters on Caracas’ west side who were trying to join a larger march – though there was no immediate repeat of Wednesday’s violent clashes.

“The opposition renewed the demonstrations quickly because they want to keep the momentum going,” Al Jazeera’s Daniel Schweimler, who has been denied access to report in Venezuela, said from Argentina’s Buenos Aires.

“Assuming the numbers stay high, it will add pressure on to Maduro to listen to their wishes that he stepped down or called elections.”

There was a heavy security presence in the capital and other flashpoint cities, with armoured trucks and riot police guarding the main roads.

“It’s time for the armed forces to realise that they’re protecting corrupt leaders and not the Venezuelan people,” said Jorge Millan, an opposition member of parliament who represents part of the poor hilltop Caracas neighbourhood of 23 de Enero, once a government stronghold.

The current wave of marches, the most sustained protests against Maduro since 2014, has sparked regular clashes in which youths and National Guard troops exchange volleys of rocks and tear gas.

Late on Thursday, Delcy Rodriguez, Venezuela’s foreign minister, blamed the opposition for an attack on a maternity hospital where 54 children were housed.

READ MORE: Why some Venezuelans have turned to bitcoin mining

The opposition, however, has repeatedly accused Maduro of letting state forces and gangs of armed thugs violently repress demonstrators.

Two students and a National Guard sergeant  were killed  in Wednesday’s demonstrations.

Interior Minister Nestor Reverol said one person had been arrested for the sergeant’s death, which he called a premeditated “act of fascism”.

The political turmoil, coupled with a deepening economic crisis characterised by triple-digit inflation and shortages of food and basic consumer goods, has galvanised the often divided opposition in their efforts to force Maduro from power.

“There is a disparate and polarised opposition, which is not really speaking with one voice,” Schweimler said.

“The only time they really speak with one voice is calling for Maduro to resign – and that is when they are out in the streets in huge numbers.”

The renewed wave of protests was sparked by a Supreme Court move in March to assume the powers of the opposition-led Congress, a move that was reversed a few days later.

The rallies were further fuelled when the government barred the opposition’s best-known leader, two-time presidential candidate Henrique Capriles, from running for office for 15 years.

“This is the moment,” said Raquel Belfort, a 42-year-old protester in wealthier eastern Caracas on Thursday, sporting a hat in the yellow, blue and red colours of the Venezuelan flag.

“People are sick of this … we’ve touched rock bottom. I think if we take to the streets every day we’ll end this government.”

“We call for concrete gestures from all parties to reduce polarisation and create the necessary conditions to address the country’s challenges,” Guterres said in a statement.

The European Union added to the condemnation, calling the deaths of protesters “highly regrettable” and urging all sides to “de-escalate”. 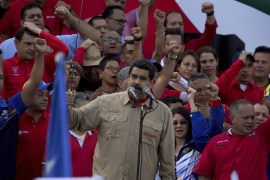 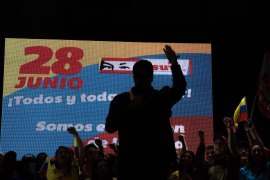