A fresh round of UN-brokered talks between rival sides in the Syrian conflict resumed in Geneva on Friday but prospects for a breakthrough remain slim, amid ongoing violence across the country.

In Syria, rebels were advancing in Hama Province, as part of their biggest offensive against government forces in months.

The city of Hama remained under government control but the opposition has gained ground in the countryside; rebels have seized 11 villages and several ammunition depots since Tuesday.

The UK-based Syrian Observatory for Human Rights monitor reported fresh violence on Friday, including shelling by government forces of areas in Sahl al-Ghab, northwest of Hama, and ongoing clashes in the countryside north of the city, as the army sought to retake territory and stop rebels from capturing a military airport.

Rebels fought with soldiers on the edge of the city centre in the Jobar district for a fifth day on Thursday.

Forces loyal to President Bashar al-Assad‘s government conducted artillery and air strikes in a bid to restore control of positions they lost earlier this week, after surprise attacks by rebels in the northeast of the city.

Nasr al-Hariri, the Syrian opposition’s chief negotiator in the talks, accused the government of not being committed to peace.

“I would like to remind you that since the beginning of the last round of talks, last month in Geneva, at least 11 schools have been targeted, in addition to at least 11 medical centres, including hospitals and makeshift clinics, and five markets by the Assad regime’s air force and the countries that are supporting the regime.”

Al Jazeera’s Hashem Ahelbarra, reporting from Beirut, said that the rebels were aiming to put more pressure on the international community as they tried to bring about a political solution to the crisis.

“This is the first time in months that we’ve seen momentum being built by the rebels to take over ground, particularly in Hama,” he said.

“[The rebels] are sending a clear message to the international community that, despite the fact that they lost Aleppo last year … they can still change the reality on the ground.”

Marwan Kabalan, an analyst at the Doha Institute’s Arab Centre for Research and Policy Studies, told Al Jazeera that little had been achieved in the talks, which were entering their fifth round.

Kabalan said that the parties should be discussing four main themes – governance, fighting “terrorism”, the constitution, and elections – but stressed that little was expected from this latest round.

“Most of the regional and international powers are not yet actually committed to solving this crisis,” he said, adding that the US was focusing more on the fight against the Islamic State of Iraq and the Levant [ISIL, also known as ISIS] while Turkey’s focus was on the actions of Kurdish groups in Syria.

UN special envoy for Syria, Staffan de Mistura, has recently been shuttling between Moscow, Riyadh, and Ankara, and talking directly with the US, in preparation for the talks.

“De Mistura understands very well that, without the support of regional and international powers who are heavily involved in this conflict, he cannot actually achieve anything in Geneva,” Kabalan said.

De Mistura, who met separately with government and opposition delegations on Thursday, said the talks were the only hope to end the fighting.

The United Nations said fighting around Syria’s capital has cut off 300,000 people from humanitarian assistance and that pauses in the conflict were needed to allow aid convoys to get to the area.

“The increase in the fighting has disastrous effects on the civilian population,” Egeland explained. “They haven’t had any supplies by the UN since October in Douma, and in the Kafr Batna area not since June of last year.” 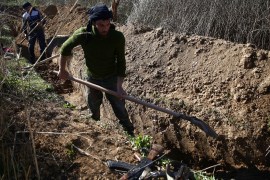 Fierce fighting in Syria as talks restart in Geneva

A fifth round of Syria talks in Geneva kicks off on shaky ground as clashes increase in Hama and Damascus.