Steady shelling and sniper fire could be heard across Damascus on Sunday as rebel factions allied with former al-Qaeda affiliate Jabhat Fateh al-Sham launched an attack on government positions in the city’s east.

The clashes centred on a government-held gap between two besieged opposition enclaves, the Jobar and Qaboun neighbourhoods. The Ahrar al-Sham rebel group said fighters had “liberated” the area.

Syrian state media said the military had repelled an attack by one group after “terrorists” infiltrated through tunnels in the middle of the night.

Rebels detonated two large car bombs at 5:20am on Sunday near the Jobar neighbourhood. Tahrir al-Sham claimed responsibility for the attack.

Rebels then advanced into the nearby Abbasiyn Square area, seizing several buildings and firing a barrage of rockets into multiple Damascus neighbourhoods, according to Rami Abdelrahman of the UK-based Syrian Observatory for Human Rights.

Government forces responded with nearly a dozen air strikes on Jobar, he added.

‘The fight is still on’

Al Jazeera’s Mohamed Al Jazaeri, reporting from near Damascus, said that at least 15 civilians had been killed after government forces shelled residential neighbourhoods in Eastern Ghouta, but that the fighting had since become less intense.

“This advance is the largest for opposition groups in over a year and a half,” Al Jazaeri said. “Military operations have not stopped in the area but it has calmed down. There remains sniper shooting from both sides and regime forces are shelling Jobar neighbourhood, as well as other areas controlled recently by the opposition.”

Control of Jobar – which has been a battleground district for more than two years – is divided between rebels and allied fighters on one side, and government forces on the other. It is one of three pockets in the Syrian capital still in opposition hands.

The recent fighting has resulted in rebel control of industrial areas in Al-Qaboun in addition to parts of Abbasiyn breaking a siege on the area and linking it to Jobar neighbourhood, which is connected to Eastern Ghouta, Al Jazaeri said.

Joshua Landis, an expert on Syria at the University of Oklahoma, told Al Jazeera that the offensive had taken the government by surprise and that its response was likely to be very significant.

“I don’t think it’s going to change the trajectory of the war, which has been seeing the regime make important gains and the opposition getting increasingly restricted. But it shows the opposition is far from dead. It shows also that this new combination led by [Tahrir al-Sham] is very potent,” Landis said.

“The regime is going to realise that it cannot allow these two areas to linger there because they are beachheads for this Tahrir al-Sham group to make inroads into the Damascus area,” he said, adding that the government would most likely withdraw some forces from areas such as Homs and Hama to refocus on Damascus.

Syrian state TV aired footage from Abbasiyn Square, typically buzzing with activity but now empty except for the sound of shelling.

Residents said artillery shells and rockets were landing in the heart of the city.

The Observatory said rebel shells hit several nearby districts in Damascus, including Bab Touma, Rukn al-Din and the Abbasiyin area.

Several schools announced they would close through Monday, and many civilians cowered inside in fear of stray bullets and shelling.

‘From defensive to offensive’

According to the Observatory, the Faylaq al-Rahman group and the Fateh al-Sham Front – known as al-Nusra Front before it broke ties with al-Qaeda – were present in Jobar.

“This neighbourhood is the most important frontline because it’s the closest rebel position to the heart of the capital,” said Abdel Rahman.

Government forces have long sought to push the rebels out of the district because of its proximity to the city centre in Damascus.

But with Sunday’s attack, Abdel Rahman said, “rebels have shifted from a defensive position in Jobar to an offensive one.

“These are not intermittent clashes – these are ongoing attempts to advance,” he said.

One rebel commander told the Associated Press news agency they launched the assualt from Jobar as a way to relieve allied fighters in the nearby districts of Barzeh, Tishreen, and Qabun from government attacks.

“This is to relieve the pressure on rebels with the regime not stopping its bombardment and artillery shelling,” said Abu Abdo, a commander from Failaq al Rahman.

The attack on Damascus comes just days before a fresh round of UN-brokered peace talks in Geneva aiming to put an end to Syria’s six-year war.

Rebels and government troops agreed to a nationwide cessation of hostilities in December, but fighting has continued across much of the country, including in the capital.

Rebels said the army had advanced in the past two days after weeks of bombardment and aerial strikes aimed at regaining control of strategic areas inside the capital, a few kms away from President Bashar al Assad’s seat of power.

The army had advanced towards a road between Qaboun and Barza, whose capture severed the links between the two besieged rebel districts where tens of thousands of people live.

“Taking this road would isolate Barza and Qaboun completely and with a security belt around it,” said Abu Abdullah, another fighter with Failaq al Rahman rebel group.

The army and allied militias have been targeting the besieged Eastern Ghouta area, the biggest remaining rebel bastion around the capital, for months, making incremental gains.

It has undertaken a relentless bombing campaign of residential areas to force rebels to surrender and agree to deals that push them out of these areas. 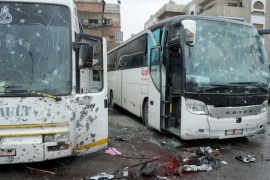 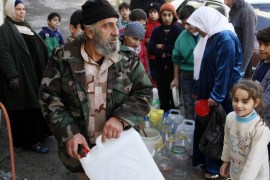