The death toll from heavy rains in Peru has risen to 67 people, with thousands more forced from their homes since the beginning of the year.

Peruvian President Pedro Pablo Kuczynski said on Friday that the rains, which followed a period of severe drought, were a “serious climatic problem”.

“There hasn’t been an incident of this strength along the coast of Peru since 1988,” Kuczynski said.

The latest round of unusual rains came after a series of storms that struck the country’s northern coast especially hard, causing flood waters that inundated hospitals and left some small villages completely isolated.

Earlier this week, the military used helicopters to rescue at least 35 people who were stranded in the northern village of Lambayeque.

The government has declared states of emergencies in hundreds of districts across the country, and on Friday it announced plans to increase the state’s budget by $1.35bn to help with recovery efforts.

Officials have said the rains are caused by the El Nino-triggered warming of the surface waters of the Pacific Ocean and are expected to continue for another two weeks. 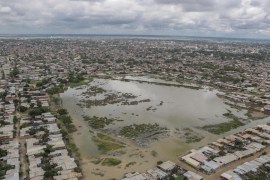 The South American country has felt the effects of heavy rain since the turn of the year.