Lawyers representing two indigenous Namibian tribes are meeting for a pre-trial conference in New York on Thursday following a lawsuit filed earlier this year that demands compensation for the descendants of people massacred in the 20th century’s first genocide.

Between 1904 and 1908 about 100,000 Herero and Nama people were killed by German colonial leaders in South West Africa, now known as Namibia, when the territory was a German colony.

German settlers, with the explicit consent of German colonial authorities, seized about a quarter of Ovaherero and Nama lands between 1885 to 1903.

Tensions eventually boiled over and in early 1904 the Ovaherero and Nama rose up – only to have their rebellion crushed by German imperial troops.

German authorities were accused of turning a blind eye to the widespread and systematic rape of Ovaherero and Nama women and girls, as well as the use of forced labour.

In addition to land grabs, there were concentration camps where the colonialists carried out exterminations and scientific experiments on the tribes people.

“If you look at the pictures … people looked like walking skeletons with no flesh at all,” Utjiua Muinjangue, a member of the Herero Genocide Committee, told Al Jazeera.

Berlin has repeatedly refused to pay direct reparations, saying that its development aid since 1990 is worth hundreds of millions of dollars.

“We do not talk about reparations,” Christian Matthias Schlaga, the German ambassador to Namibia, told Al Jazeera.

“We do not use the term reparations in our official communication with Namibia for the very simple fact that reparations is a legal term and has very specific legal implications, and as we do not start from the basis that this is a legal case but more a moral and historic obligation, we cannot talk about reparations.”

The lawsuit, which was filed in January, demands that the tribes-people’s representatives be included in negotiations between Germany and Namibia.

The government of Namibia “demanded and got an acknowledgement of the genocide from Germany, but no apology”, Miller said.

Both the Herero and Nama tribes say they have been left out of talks between the two governments and say the hearing in New York is the only way justice can be served.

“We don’t want what they want to do for us,” Ida Hoffman, a member of the Nama Genocide Committee, told Al Jazeera.

“We want reparations so we can do exactly what we want for our people and for ourselves.” 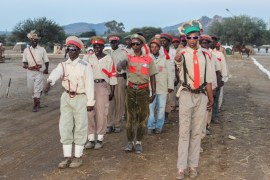 Ovaherero and Nama tribes launch lawsuit against Germany for alleged killing of 100,000 people more than 100 years ago. 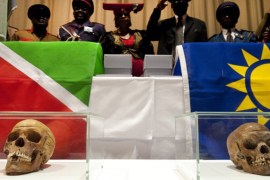 Namibia has set a deadline for Germany to respond to demands of reparations for colonial racial atrocities and genocide.