The biggest trial of suspects accused of involvement in last year’s failed military coup attempt in Turkey has opened in a prison outside the capital, Ankara.

About 330 people were put on trial in Sincan district on Tuesday, and if convicted, they could face multiple life sentences over their alleged links to the attempted overthrow of President Recep Tayyip Erdogan in July.

More than 240 of those named in the indictment are in custody, according to state-run news agency Anadolu.

The suspects, many of them from the Polatli artillery and missile school command in Ankara, have been charged with murder or attempted murder.

They are also accused of attempting to remove the government and parliament of the Turkish republic or trying to prevent those institutions from conducting their work.

The case is being heard at Sincan prison where there was heavy security in place, with a water cannon truck on site and a drone flying overhead as families arrived for the hearing.

The court, which has space for 1,558 people, including 720 defendants and 600 lawyers, was packed with security forces surrounding the suspects as they testified.

The first suspect, a military cadet called Abdulkadir Kahraman, told the court that on the night of the coup, troops had been informed by their commander that there had been a “terror” attack and were given ammunition.

Other suspects gave similar statements, including Arif Ozan Demir who told the court the commander told them there had been an attack and that they should “be prepared”.

Ankara has blamed the failed coup attempt on Islamic preacher Fethullah Gulen – who lives in self-imposed exile in the United States – and his movement.

Turkey has denounced the movement as a “terrorist” organisation and the suspects on trial at Sincan are also accused of belonging to an armed “terror” group.

The hearing is one of several cases that opened across the country this month, with 47 people going on trial in the western city of Mugla on charges of attempting to assassinate Erdogan.

A state of emergency was declared following the July 15 failed coup attempt, while more than 43,000 people have since been placed in pre-trial detention.

The state of emergency remains in place as the trials get under way in the biggest legal process in the country’s history. 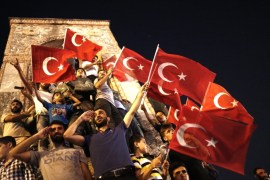 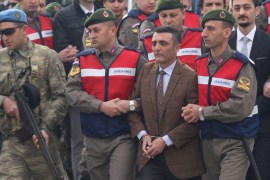 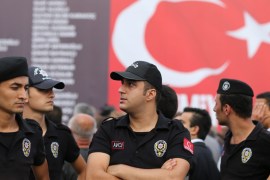 More than 5 percent of country’s police force suspended as state of emergency is extended for three more months.