Venezuela‘s opposition coalition refused to recognise the results of Sunday’s gubernatorial elections where the ruling socialists won a surprise majority, raising the spectre of more political turmoil in the oil-rich nation.

The Democratic Unity’s (MUD) election campaign chief, Gerardo Blyde, demanded a complete audit of the 23 governor races and called on its candidates to lead “street activities” on Monday in protest over the results.

“We do not recognise any of the results at this time. We are facing a very serious moment for the country,” Blyde said.

President Nicolas Maduro said his government had scored an “emphatic victory” over its rivals by leaving the opposition with only five states, with his socialists still in line to take one further state where the results were still in dispute early Monday.

The results amounted to a crushing blow to the opposition which had characterised the elections as a referendum on Maduro, after months of deadly street protests earlier this year had failed to unseat him.

International powers accuse Maduro of dismantling democracy by taking over state institutions in the wake of an economic collapse caused by a fall in the price of oil, its main source of revenue.

Last week, an International Monetary Fund report said there was no end in sight to the suffering of the Venezuelan people with food and medicine shortages intensifying a “humanitarian crisis”.

An ebullient Maduro told supporters that “Chavismo” – the brand of socialism he inherited from late President Hugo Chavez 2013 – had won the popular vote across the country.

“We have 17 governorships, 54 percent of the votes, 61 percent participation, 75 percent of the governorates, and the country has strengthened,” he said.

“I ask that we celebrate with joy, music, dance, but in peace, with respect to the adversary.”

Public opinion surveys had predicted that the opposition would win between 11 and 18 state governorships despite alleged government dirty tricks, which included relocating hundreds of polling stations away from areas where it had high support.

“All the pre-trial opinion studies, all our counts, are very different from the results that are going to be announced. We have already alerted the international community and we are alerting the country,” Blyde had warned earlier.

Sunday’s polls were the first contested by the opposition since the legislative elections in 2015 that gave it a majority in the National Assembly.

Turnout was over 61 percent, with many polling stations remaining open past the official 6:00pm (22:00 GMT) closing time to cope with lines of voters after a day of peaceful voting.

The MUD has seen Maduro tighten his grip on power after facing down four months of protests that killed 125 people between April and July, forming a Constituent Assembly packed with his own allies and wresting legislative power from the opposition-dominated National Assembly.

Maduro said he had sent a message to opposition leader Julio Borges: “For the love of God, abide by the transparent results.”

For Maduro, the polls were an opportunity to counter allegations of dictatorship levelled at him at home and abroad after forming the Constituent Assembly. 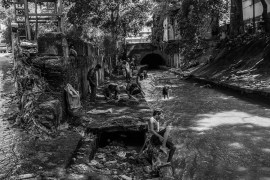 Scavenging to survive in Venezuela

An economic crisis has driven many Venezuelans into the sewage-strewn waters of the Guaire River in search of valuables. 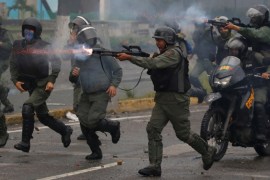