Sunday marks a 1,000 days since 276 Nigerian girls were abducted from a school in the country’s northeast by Boko Haram fighters.

Some of them have since been released while others managed to escape – but nearly 200 girls still remain in captivity.

In a message to mark the mass kidnapping, Nigeria’s President Muhammadu Buhari said he remained committed to ensuring the abducted schoolgirls were reunited with their families “as soon as practicable”.

“We are hopeful that many more will still return,” Buhari, who came to power in 2015, said. “The tears never dry, the ache is in our hearts.

“Our hearts will leap for joy, as more and more of our daughters return. It is a goal we remain steadfastly committed to.”

‘Bring Back Our Girls’

On April 14, 2014, Boko Haram fighters stormed the government secondary school in the remote town of Chibok, in Borno state, seizing 276 girls who were preparing for end-of-year exams.

The abduction drew international attention to the armed group, while the Nigerian government’s failure to act quickly to free the girls sparked a global Bring Back Our Girls movement.

Eighty-one, including 21 whose release was negotiated in October 2016, are now free and in government care, with the latest one being freed on Thursday along with her six-month-old baby.

At least 195 girls are still in captivity, according to official records.

‘We are all in captivity’

In the capital Abuja, Bring Back Our Girls campaigners were preparing to march to the presidential house later on Sunday.

Speaking to Al Jazeera, Aisha Yesufu, one of the campaign’s leaders, said the government needs to specify a timeline as to when families can expect their children back.

“It’s so sad that today is 1,000 days and we are still here demanding for the rescue of our Chibok girls,” she said, urging the president to deal with the issue as a priority.

“Buhari should realise that for 1,000 days his daughters have been in captivity and they need to come back home; it’s been too long,” Yesufu said.

“We still have 195 that are waiting for the whole world to bring them back because right now the Chibok girls are no longer just Nigerian girls – they are world citizens; they represent everything that a girl child goes through to get education and they have been in captivity for 1,000 days because they dared to dream,” Yesufu added.

Despite winning back swaths of territory from Boko Haram fighters, Buhari has faced intense criticism for failing to recover the young captives, who became the defining symbol of the armed group’s violent campaign in northern Nigeria.

The country has recently trumpeted a major victory in its battle against Boko Haram, claiming in late December that its army has routed the fighters from their Sambisa forest stronghold, in Borno state.

But Boko Haram still poses a threat to the region, launching sporadic raids on remote villages in Nigeria and attacks on soldiers in neighbouring Chad and Niger. 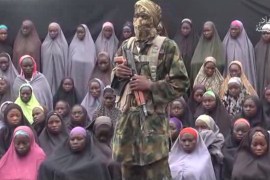 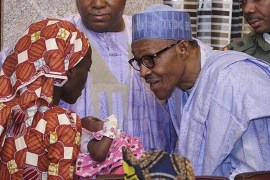 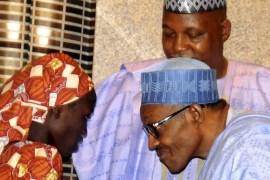