Few details have emerged from Manama two days after the US called for the release of jailed activist Nabeel Rajab, but a Bahraini government spokesperson did cite an ongoing investigation that is thought to involve him.

The US State Department on Tuesday called for Rajab’s immediate release after The New York Times published a letter by the activist that said he was facing prosecution for his work exposing human rights abuses in Bahrain and criticising the war in Yemen.

Prosecutors in Bahrain filed new charges on Monday against an unidentified man, believed by rights activists to be Rajab, for “publishing a column in a foreign newspaper in which he deliberately spread news, statements and false rumours that undermine the kingdom’s stature”.

“The case is still being investigated by the public prosecution,” said a  Bahraini government spokesperson, who did not name Rajab as the subject of the new charges. “The public prosecution is independent of the government. Every suspect, as per the laws of the Kingdom of Bahrain, is not guilty until proven otherwise.”

A statement from the government’s official news agency reported that the person in question “said that it was impossible for him to make statements to any party, being remanded in custody pending trial over a case that is currently examined by courts”.

Asked about the new charges, State Department spokesman Mark Toner said Washington was “very concerned” about Rajab’s “ongoing detention and the new charges filed against him.

“We have concerns about the state of human rights in general in Bahrain and we’re engaging with the government … on all these issues,” said Toner.

No official statement has yet been disseminated about the role of US involvement in Bahrain’s human rights issues, or Toner’s statements in general.

Rajab, who met with US Secretary of State John Kerry earlier this year, said in his letter to the Times that he had been detained, mostly in isolation, in Bahrain since the beginning of the summer.

Opposition political groups in Bahrain staged large protests during the Arab Spring of 2011, when demonstrators across the Arab world took to the streets calling for greater democracy. The protests in Bahrain were put down when neighbouring Saudi Arabia sent troops to restore order.

Political tensions have continued since then in Bahrain, which is home to the US Fifth Fleet.

Al Jazeera’s D. Parvaz contributed to this piece from Doha. 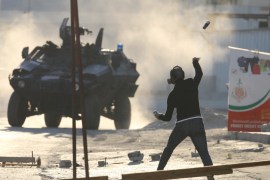 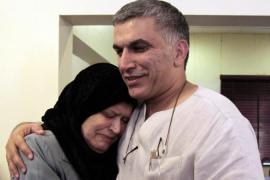 Nabeel Rajab: The problematic success of ‘human rights’ in the Arab world

Is there space for dialogue with the government in Bahrain? 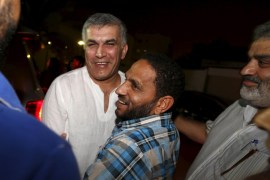 Prominent campaigner for democratic rights was serving a six month sentence for insulting the government.