Armed men have seized a police station in Armenia’s capital, Yerevan, and taken an unknown number of hostages on Sunday morning, the country’s security service said.

Deputy police chief Artur Vanoyan was killed and three officers were wounded during the armed takeover of the station, first deputy of Armenia’s national police force Hunan Poghosyan told reporters on Sunday outside the police station

As of Sunday afternoon, armoured police vehicles had surrounded the station in preparation for a potential raid.

Poghosyan said the police and security forces would “undertake necessary means” to bring an end to the hostage situation if the armed men refused to surrender.

“Because there is no other way to deal with murderers,” Poghosyan said. “But as long as there is still hope to end the situation through negotiations, we will continue to negotiate.”

Negotiations were under way to resolve the situation peacefully, the National Security Service said, accusing the hostage takers’ supporters of spreading false rumours on the internet that an armed uprising against the government was under way.

“A group of armed men entered the premises of a police regiment in Yerevan and is holding hostages under the threat of violence,” the security service said.

Armenian news agencies reported that the armed men were demanding the release of Jirair Sefilian, an opposition leader and former military commander, who was arrested in June.

Sefilian has strongly criticised Armenia’s President Serzh Sargsyan and is unhappy about the way the government has been handling a long-running conflict between pro-Armenian separatists and the breakaway Azeri region of Nagorno-Karabakh.

“Supporters of Jirair Sefilian have always said they would launch an armed uprising to get rid of the current authorities. His organisation maintains that this is an illegitimate government that came to power through flawed elections and is holding on to power against the will of the people,” she added.

“Among their demands is the resignation of President Serzh Sargsyan and the release of all political prisoners in Armenia. They do not have wide support in the country.”

The security service said law enforcement agencies were working as normal to uphold public safety. TV images of the scene showed a heavy police presence with armoured vehicles blocking off the road to the police station.

The hostage takers’ supporters were spreading what it called “disinformation” about the seizure of other buildings as part of a coup, according to the security service.

“The National Security Service officially announces that such information is absolutely untrue,” it said. 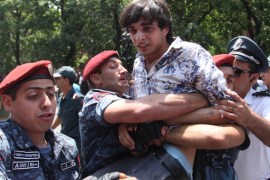 Demonstrations over price hikes continue after police clear key artery in capital that protesters had blocked for weeks. 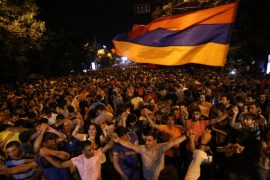 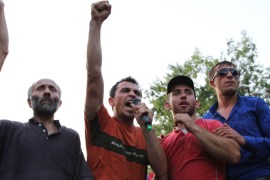 About 15,000 demonstrators flood streets of Yerevan over government decision to raise electricity price by 17 percent.