At least 15 people have been killed and more than 40 others were injured in bombings targeting a police checkpoint, a restaurant and two markets in and around Baghdad, Iraqi officials said.

The deadliest incident occurred when a suicide bomber detonated his explosives at a checkpoint in Tarmiyah, about 50km north of the capital, killing eight people and wounding 15 others.

Three of the dead were soldiers, army officials said.

In a separate development, the Iraqi army reported that it had managed to chase out the Islamic State of Iraq and the Levant (ISIL, also known as ISIS) group from a suburb of Fallujah, which lies 50km west of Baghdad, after fierce clashes.

“Security forces raised the Iraqi flag in the suburb after pushing deep into the area and killing at least 27 Daesh elements,” he said, using an Arabic acronym for ISIL.

Also on Saturday, at least 34 Iraqi soldiers were killed in two separate attacks by ISIL in the same area.

The first attack occurred in the early hours of Saturday, as the armed group mounted an attack with a suicide car bomber targeting Iraqi army and Shia fighters to the south east of Fallujah city, killing at least 14 soldiers and 15 injuring others.

Later in the day, 20 Iraqi soldiers, including Sunni tribal fighters, were killed in an ISIL suicide car bombing targeting an Iraqi army convoy at the main road of al-Azrakiyah, northwest of Fallujah city, according to Iraqi military sources talking to Al Jazeera.

The blast was followed by an ISIL assault on the convoy which resulted in the destruction of 15 military vehicles.

On Wednesday, at least 130 Iraqi soldiers were killed by a series of suicide attacks in Fallujah.

Several bombings have hit Baghdad since the offensive on Fallujah started on May 23.

Up to 50,000 people are still stuck in the centre of the city, struggling with dwindling water and food supplies.

No aid has reached Fallujah since September last year and residents have been living on dates, dirty water from the Euphrates and animal feed, aid groups said. 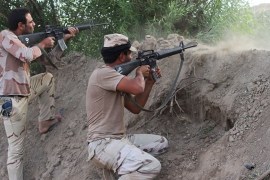 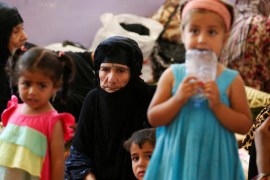