Karachi, Pakistan – Twenty-two-year-old Ammara* rarely stepped out of her family’s haveli, or mansion, in a remote village in Pakistan’s Sindh province.

Her father, a feudal lord, never felt the need to send her to school, or anywhere else, and provided her with all of life’s comforts and luxuries within the confines of the haveli.

“I had never imagined I would leave the haveli for a place like this but my father left me with no other option when he told me I must marry the alcoholic, twice-married man he had chosen for me,” Ammara told Al Jazeera inside a tiny room at a women’s shelter home in Pakistan’s southern city of Karachi.

It has been six months since she ran away from home along with her nine-year-old sister, fearing the same fate for her once she grew up.

“I grew up watching my father decide the fate of too many innocent, helpless women in karo-kari (honour killing) cases.”

Ammara managed to escape but that is not the case for hundreds of other women in Pakistan.

Eighteen-year-old Zeenat Rafiq was burned alive by her mother in Lahore earlier this month. Her crime, according to her mother, was marrying a man of her choice and against the family’s will.

Police said Parveen Rafiq, Zeenat’s mother, was assisted by her son and husband of her other daughter as they avenged Zeenat for “bringing shame to the family”.

Zeenat’s fate was no different from that of a 19-year-old teacher in the hill town of Murree, who was assaulted, burned alive and thrown behind her family home by a group of men. She had reportedly refused to marry the principal’s son.

She died due to the 85 percent burns in an Islamabad hospital a day later.

Pakistan’s Council of Islamic Ideology (CII), a constitutional body responsible for ensuring no legislature in the country is repugnant to Islam, has drawn up a 163-point bill listing women’s rights as well as actions it deems non-permissible for women.

The group recently declared it is permissible for a man to “lightly beat” his wife “if needed”.

The bill was presented last month in response to the Protection of Women Against Violence bill (PWAV) 2016, which was passed in the Punjab Assembly earlier this year and is aimed at providing relief to women facing domestic abuse.

“The existence of this council cannot be justified,” Rahman told Al Jazeera.

“When the country’s constitution says no law shall be made against Islam, that should be enough. Besides, lawmaking and bill-passing are tasks entrusted with people sitting in the assemblies, who have been voted in, who are representatives of the public, whose main duty is legislation.”

The CII, in turn, argues that by passing the bill without its consent, the Punjab Assembly has  committed an act of treason .

Of late, Pakistani legislators have also  been vocal in their opposition  to the CII. Opposition senators last Friday blamed “the anti-women bias of the CII” for the recent rise in incidents of violence against women.

While legislators, religious scholars and rights activists battle it out for influence, women in Pakistan continue to be victims of what a group of men or a family consider as their “honour”.

According to the Human Rights Commission of Pakistan (HRCP), there were 470 cases of honour killing against women last year.

Of those, 145 were categorised under “marriage choice” and 254 under “illicit relations”.

Both subsets are based on the constitutional right of citizens of Pakistan to carry out their lives according to their own will, but both are culturally and traditionally controlled by men or elders of the family.

“Laws are not the only way to resolve all issues,” said Rahman.

“We need to improve our social structures and our ancient customs and traditions in order to move forward.”

Meanwhile, police officials act as the first point of contact and, according to a senior official, they try to side with women while dealing with cases involving domestic abuse or violence against women.

“Our first call of action is to arrest the accused and file a First Information Report (FIR),” Superintendent of Police Faisal Mukhtar told Al Jazeera in Lahore.

“We treat accusations of violence between two unrelated parties differently than those of domestic violence between husband and wife. We pay more attention to ground realities and try to help them bridge their differences by counselling.”

Mukhtar says cases of domestic abuse are mostly reported by women belonging to the middle or lower-middle classes of the society.

“In the lower economic class, women perceive domestic abuse as part of their culture and tend to accept it as their fate while the upper class directly goes towards divorce or compromise without involving the police on most occasions,” he said.

Activists say that by not having any clauses that criminalise violence against women, the PWAV relies on the basic tenets of the Pakistan Penal Code for action against perpetrators.

The main focus of the bill is on the establishment of protection centres and shelters for the victims but religious opposition to the bill has brought this process to a halt, according to Mukhtar.

In lower class, women perceive domestic abuse as part of their culture and tend to accept it as their fate

“It [the opposition] has made an impact. The process of implementation has slowed down and people are not promoting it or creating awareness about women’s rights, which is also a part of the bill,” he said.

The shelter homes and centres set up for working women and single mothers by various nongovernmental organisations across the country are barely able to keep up with the influx of regular admissions.

Anis Haroon, former chairwoman of National Commission on Status of Women, told Al Jazeera that while political parties are quick to pass such bills while in power, they fail to follow it up when it comes to implementation.

“For laws concerning women, there is a lack of political will in terms of implementation,” said Haroon, who is also a lawyer.

“But even if a handful of cases are reported, they have an impact because the criminals get this message that they will not get off scot free.”

It is that very message that Ammara wanted to give her father when she fled with her sister, having little idea of life outside her family mansion.

In addition to receiving educational and vocational training at a temporary sanctuary, she is also learning to do daily chores and help other housemates.

“I miss my parents and the luxurious life I had back in my village,” Ammara said, “but I wouldn’t leave this independence and freedom to choose my own future I have here for all the luxuries in the world.” 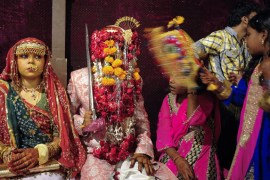 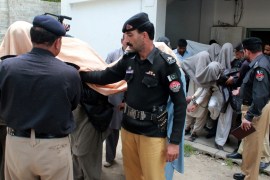 Arrests made in Pakistan ‘honour killing’ for elopement

The stoning of Farzana Parveen provoked media attention, but cases like hers rarely lead to perpetrators’ imprisonment.