Azerbaijan has sentenced Khadija Ismayilova, an award-winning investigative journalist and anti-corruption campaigner, to seven-and-a-half years in jail over several fraud charges which she denounced as politically motivated.

The court in Baku on Tuesday sentenced Ismayilova to prison for a string of convictions, including, embezzlement, tax evasion, illegal business activity, and abuse of power, but found her not guilty of inciting a colleague to commit suicide.

Ismayilova’s lawyer Fariz Namazly called the verdict “illegal” and vowed to appeal against it.

Considered Azerbaijan’s most prominent critical journalist, Ismayilova served as bureau chief for the local service of the Radio Free Europe/Radio Liberty network between 2008 and 2010, and then became the host of a daily debate show on the network.

Held in pre-trial detention since December, Ismayilova, 39, had denounced the charges against her as trumped up, and an attempt to stop her filing reports critical of senior officials, including President Ilham Aliyev.

The journalist has investigated and reported on the alleged vast riches amassed by Aliyev and his family.

Related: What is not being reported in Azerbaijan

In her final statement to the court on Monday, Ismayilova said prosecutors and court officials had “resorted to more and more lies and fakery”.

Ismayilova supporters say the charges against her have been concocted by a government anxious to silence one of the few voices of independent journalism in the oil-rich former Soviet country.

A government spokesperson, however, told Al Jazeera that attempts to politicise the court’s verdict were “unacceptable”.

“During the trial the charges were fully proved and the adequate decision was made.”

Rights groups accuse the government of stepping up pressure on opponents after Aliyev’s re-election to a third term in 2013.

Earlier this month, Azerbaijan jailed a prominent rights activist couple to lengthy jail terms in a case that was also decried as politically motivated.

Aliyev, 53, denies accusations of rights abuses, while his administration has dismissed such criticism as a smear campaign.

Aliyev took over after the death of his father Heydar Aliyev, a former KGB officer and communist-era leader, who had ruled newly independent Azerbaijan with an iron fist since 1993. 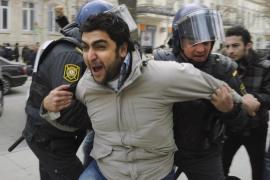 What is not being reported in Azerbaijan

So long as the government keeps saying there are no limitations on freedom of speech, nothing will change in Azerbaijan. 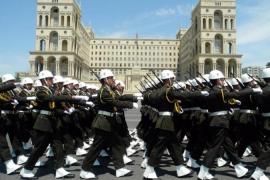 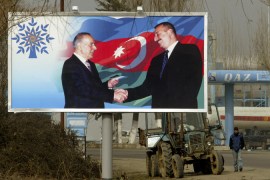