Silwan, occupied West Bank – For days, neighbours, friends and family have been gathering at the home of Abdullah Abu Nab in the East Jerusalem neighbourhood of Silwan, hoping to stop his family’s looming eviction.

A recent ruling from Israel’s Supreme Court gave Abu Nab’s family – comprised of 16 people living in two separate homes – until August 11 to leave. The ruling determined that Jewish settlers were entitled to the land, based on a presumption of historical Jewish ownership.

But Abu Nab says he has no intention of complying. Instead, he has erected a makeshift tent in front of his home, lined up plastic chairs, and ensured the supply of coffee never runs low for the friends and neighbours who visit every evening, amid a significant police presence.

“My family has been renting this house since 1948,” Abu Nab told Al Jazeera, noting his family had been previously expelled from the Jurat el-Anab neighbourhood in present-day West Jerusalem, which fell under Israeli control after the Arab-Israeli war in 1948.

Located just outside of Jerusalem’s Old City walls, Silwan’s narrow streets and simple, cinder-block homes stand in the shadow of Al-Aqsa Mosque, whose dome can be seen from the terrace of Abu Nab’s house.

Visible from the same terrace is Israel’s national flag, erected in front of a nearby home by settlers. Three months ago, Jewish settlers moved into two homes on Abu Nab’s small housing block after they struck a financial deal with the families previously living there.

Silwan has been the target of Jewish settler organisations since the late 1980s, when they started acquiring property there by various means, including legal battles and private purchases.

Abu Nab’s family has been fighting to stay in their home since 2002, when the settler organisation, Ateret Cohanim, filed a lawsuit alleging that the land where Abu Nab’s property sits had been registered as hekdesh, or Jewish religious property, since 1881. “We’ve been paying rent to a Palestinian man, then his son, then his grandson for decades,” said Abu Nab, who works in construction.

According to settlement watchdog Peace Now, the case is part of a larger scheme by Jewish settlers to seize 5,200 square metres in the area of Silwan’s Batan al-Hawa neighbourhood, where an estimated 80 Palestinian families live in more than 30 buildings.

A number of families living here are currently embroiled in legal proceedings, and residents fear Abu Nab’s eviction could create a precedent. On August 9, another family from Batan al-Hawa was handed an eviction notice by a lawyer representing Ateret Cohanim.

“Ateret Cohanim is involved in strengthening Jewish roots in the heart of Jerusalem,” the group’s executive director, Daniel Luria, told Al Jazeera. “[Our organisation works to acquire property from Palestinians for] Jews around the world who want to buy – basically continuing the Zionist dream of Jews returning to the land of Israel. And obviously at the centre of that dream for the past 2,000 years has always been Jerusalem.”

Batan al-Hawa was home to a community of Yemenite Jews until the 1930s, when they fled amid increasing violence between Arab and Jewish residents, Luria noted.

The problem with that is that the Palestinians also lost property in 1948 - in the same city, in the same war, and they are not allowed to recover their properties.

Ateret Cohanim’s actions are facilitated by a law passed by the Knesset in 1970, which allows Jewish landowners who owned property in East Jerusalem prior to the 1948 war to recover those properties.

“The problem with that is that the Palestinians also lost property in 1948 – in the same city, in the same war, and they are not allowed to recover their properties,” Daniel Seidemann, an Israeli lawyer and founder of the advocacy group Terrestrial Jerusalem, told Al Jazeera.

“So what we’re seeing in Silwan is the implementation of a Jewish right of return to Palestinian areas, and a denial of any kind of Palestinian right to recover their property,” he said, calling the law “blatantly discriminatory”.

RELATED: Should the PA share responsibility for settler attacks?

Hagit Ofran, who heads the Settlement Watch project at Peace Now, said the case also demonstrates cooperation between government authorities – mainly the Custodian General, which is in charge of recovering and managing properties that Jewish owners lost before the 1948 war – and settlers.

“In the past, the custodian sold properties to the settlers without any tender, without allowing the Palestinian residents of those places the chance to buy, turning the property over to the settlers for a very low price,” Ofran told Al Jazeera. Seidemann said this practise, which was blasted after a 1992 investigation by a government committee, has been revived in Batan al-Hawa.

Israel’s ministry of justice, which includes the Custodian General, did not respond to Al Jazeera’s request for comment.

While settler enclaves in East Jerusalem have come under criticism from the international community, the influx of settlers to Silwan has also heightened tensions within the community, where settler homes are protected by armed private security guards contracted by the government.

“Every time something happens outside, tensions flare in Silwan too,” said Bassam Abu Nab, a local resident and nephew of Abdullah Abu Nab.

Meanwhile, friends and neighbours are vowing to come back each evening to Abu Nab’s property, sitting in plastic chairs underneath the tent he has erected for as long as needed. 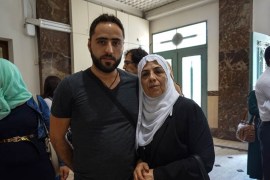 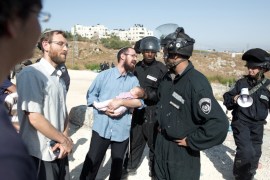 Settlers clash with police in Beit El after Supreme Court rules structures in illegal settlement should be demolished. 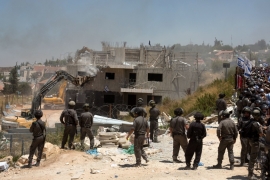