Kenya’s interior ministry has identified one of the al-Shabab gunmen who massacred students at a northeastern university as the son of a Kenyan government official.

“The father had reported to security agents that his son had disappeared from home … and was helping the police try to trace his son by the time the Garissa terror attack happened,” Njoka told the Reuters news agency in a text message.

The Kenya Today website identified Abdullahi as the son of Abdullahi Daqara, the Chief of Bulla Jamhuri in Mandera county. It described Abdullahi as a former gifted law graduate who had studied at the University of Nairobi.

As Kenya began three days of national mourning and dedicated Easter prayer services to the victims of the attack, reports emerged that Kenyan special forces were not deployed to the site of the attack, near the border with Somalia, for at least seven hours.

RELATED: Why al-Shabab has gained foothold in Kenya

Kenya’s major Nation newspaper said it took until just before 2pm for the main response team to reach the scene, despite alarm bells going off in Nairobi as soon as the first reports of the pre-dawn attack emerged.

The Nation said that the first plane to the city carried the interior minister and police chief. Some journalists based in Nairobi who drove the 365km to Garissa after hearing the first reports of the attack arrived before the special forces, who came by air, the newspaper reported.

But Amina Mohamed, Kenya’s foreign minister, defended the response, telling the AFP news agency that “fighting terrorism… is like being a goalkeeper. You have 100 saves, and nobody remembers them. They remember that one that went past you.”

Interior ministry spokesman Mwenda Njoka also dismissed the criticism. “If you look at how we responded it was not bad at all, say, compared to Westgate,” he told the Nation.

Meanwhile, the families of the victims began the grim task of identifying their bodies.

RELATED: Garissa: What has changed since Westgate?

Al Jazeera’s Malcolm Webb said relatives were emerging from a morgue in the capital Nairobi, where dozens of bodies had been brought, “in a state of shock”.

After besieging the university, the al-Shabab gunmen lined up non-Muslim students before executing them in the armed group’s bloodiest attack to date.

The attack claimed the lives of 142 students, three police officers and three soldiers.

President Uhuru Kenyatta on Saturday  pledged that the attackers  would face justice for the “mindless slaughter” and vowed to retaliate for the killings in the “severest way”.

Five men have been arrested in connection with the attack.

“He said that many of the funders, organisers and recruiters for al-Shabab are in Kenya and are Kenyans,” she said.

Across Kenya, where 80 percent of the population is Christian, Easter ceremonies were being held in memory of the students and security personnel killed, with flags flying at half-mast. 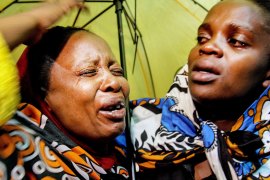 Three days of national mourning begin for victims of university massacre by al-Shabab which killed 148 people. 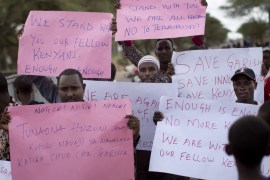 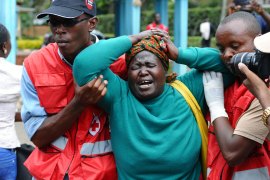