In a move to discourage poaching and trade in ivory, Kenya’s president set fire to 15 tonnes of elephant tusks at a World Wildlife Day event.

African countries are concerned about the scale and rate of the new threat to endangered wildlife species, he said.

“Many of these tusks belonged to elephants which were wantonly slaughtered by criminals. We want future generations of Kenyans, Africans and the entire world to experience the majesty and beauty of these magnificent beasts. Poachers and their enablers will not have the last word,” Kenyatta said before setting ablaze a tall pile of elephant tusks doused with petrol.

Higher demand for ivory is fuelling elephant killings by poachers across Africa.

Save The Elephants, a London-based wildlife conservation group, said last year that 100,000 elephants were killed in Africa between 2010 and 2012.

China on Thursday imposed a one-year ban on ivory imports amid criticism that its citizens’ huge appetite for ivory threatens the existence of Africa’s elephants.

Ian Douglas Hamilton, founder of Save the Elephants, said research released by his organisation showed that the price of elephant ivory has tripled in China since 2010.

Hamilton said Kenya has a long way to go before it can be clear of the poaching menace. The elephant populations in Tanzania, Gabon, Cameroun, Central African Republic, Mozambique, Republic of Congo and Congo are the worst hit by poaching, he added.

The years 2011, 2012 and 2013 witnessed the highest levels of poaching since a poaching crisis in the 1980s, according to Kenya’s Wildlife Service.

Officials partially attributed the decline to stiffer penalties adopted last year for those involved in the illegal wildlife business.

“We would like to tell the world to stop the trade in ivory because it is destroying our economy, our heritage, our environment,” said Paul Udoto, a spokesman for the Kenya Wildlife Service. 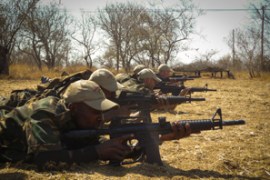 In the battle between rangers and wildlife poachers humans and animals are suffering, with casualties on both sides. 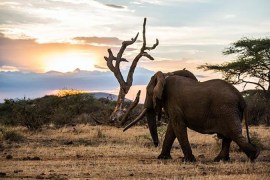 Communities that have bought into conservation and tourism risk losing it all to ‘new breed of poachers’. 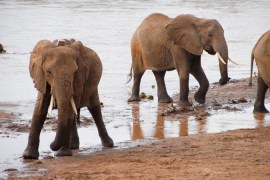 Anti-poaching drones to take off in Africa