Events in Yemen are pushing the country “to the edge of a civil war,” the United Nations special envoy has warned, calling for all parties to resolve the escalating conflict peacefully as peace talks reach a stalemate.

Speaking to the UN Security Council emergency meeting via videolink on Sunday, Jamal Benomar, who has tried to mediate the deepening conflict for several months, said that if immediate steps are not taken “the country will slide further into further violence and dislocation”.

“In conclusion, I urge all sides in spite of rising tensions to appreciate the gravity of the situation and to de-escalate by ceasing all hostilities and refraining from provocations and using violence.”

Al Jazeera’s Gabriel Elizondo, reporting from the UN headquarters in New York, said the UN diplomat’s strongly worded statement included a warning that the situation was so grave that if no political solution is reached, “Yemen could turn into something of an Iraq-Libya-Syria combination”.

The impoverished Arab nation descended into chaos in recent months, with Shia militia, known as Houthis, seizing control of the capital city of Sanaa and forcing President Abd-Rabbu Mansour Hadi to flee to the main southern city of Aden.

Benomar’s address came as the Houthis seized parts of the southern city of Taiz and its airport on Sunday after clashes with forces loyal to President Hadi.

In a televised address on Sunday, the Houthi leader Abdulmalik al-Houthi called on his supporters to mobilise towards the south of the country, a stronghold of Hadi’s allies.

The mounting unrest also includes suicide bombings at mosques in Sanaa on Friday, claimed by the Islamic State of Iraq and the Levant group, that killed 142 people. The US evacuated its remaining personnel on Saturday.

Mohammed Albasha, a spokesperson for the Yemen embassy in Washington said on Twitter that the country was teetering on the brink of full-scale war.

Hadi also said regional Shia power Iran supported the Houthis, something also alleged by critics but denied by the rebels.

Sunni Gulf countries have lined up to support Hadi and have moved their embassies to Aden to back him against the Shia rebels. The US also backs Hadi. 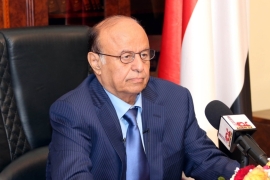 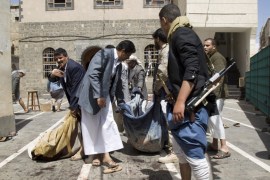 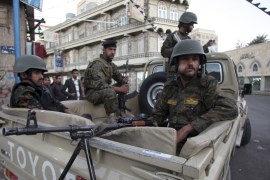