Security forces used tear gas and water cannon against protesters as several hundred took to the streets of Lebanon’s capital Beirut to protest against the government.

Activists said at least 27 people have been detained in Thursday’s incident, including Waref Sleiman who conducted a hunger strike to protest against the ongoing garbage crisis.

Protesters told Al Jazeera they would stay on the streets until all of those detained were released.

Security forces were relentlessly using tear gas and water cannon against the protesters for at least three hours.

“They should be ashamed of themselves for acting like this,” said Fadi Ramez, a protester, about the security forces. “They’re actually throwing stones at us. It’s shameful.”

The Lebanese Red Cross said at least 35 people were treated for suffocation.

Interactive: Lebanon: At the crossroads

The protesters gathered in downtown Beirut with the aim of reaching Nejmeh Square, where the parliamentary building is located but security forces erected concrete and metal blockades to prevent them from advancing forward.

What started off as a peaceful protest quickly turned violent after security forces used tear gas and water cannon.

Several protesters managed to dismantle the metal barricade and pushed away the concrete blocks.

The General Directorate for Internal Security released a statement on Thursday saying that protesters provoked security forces at the beginning of the protests as they tried to remove the barriers and barbed wires which separated the two sides.

The statement also said that protesters threw stones and other items at security forces which left several of them injured.

Earlier, the protesters’ chants “we want to enter the ministerial council!” and “the people want the downfall of the regime” sounded over loudspeakers.

“It’s actually disgusting that we are all suffering from a water shortage in this country and we are forced to pay extra because the government can’t provide us with this basic right but they have enough water to spray us continuously,” said Nidal, a protester in a soaking T-shirt and his face covered against the tear gas.

The protests were triggered by a rubbish crisis that started in July, after the main landfill for Beirut and Mount Lebanon was shut down and thousands of tonnes of rubbish were left rotting on the streets.

The country has also been without a president since May 2014, and the parliament has been unable to convene in full in order to vote for one, with cabinet ministers unable to decide how to make decisions, let alone address ongoing issues. 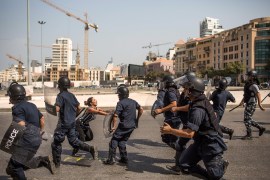 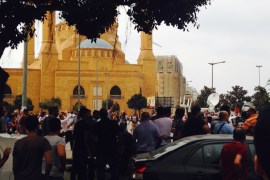 Arrests during Beirut protests as meeting by Lebanese officials fails to agree on issues including rubbish. 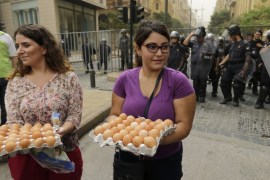