Ramallah, West Bank – Said Nafaa, a former Palestinian member of the Israeli parliament, will on Sunday begin serving a one-year jail sentence for travelling to “an enemy state”, after a second appeal of his case to the Israeli Supreme Court was rejected this month.

“Nafaa will begin his prison sentence on November 1,” said Amjad Iraqi, a spokesperson for Adalah – The Legal Centre for Arab Minority Rights in Israel. The group’s initial appeal of the Nafaa case was rejected in August, Iraqi told Al Jazeera.

Nafaa, a Druze who served in the Knesset, Israel’s parliament, from 2007 until 2013, was charged last year with travelling to an “enemy state” after a trip to Syria in 2007 to visit fellow Druze, along with about 200 other people. He was consequently stripped of his parliamentary immunity in 2010.

Critics allege Nafaa’s jail sentence is a politically motivated attempt by Israel to isolate Palestinians in Israel from Arabs living in other countries.

Nafaa, who is from Beit Jann in northern Israel, has encouraged Israel’s Druze population to abandon its traditional loyalty to the state of Israel, to adopt a Palestinian and pan-Arab identity, and refuse mandatory military service in the Israeli military.

Adalah said the original ruling in late August was a blatant example of politics trumping the rule of law. “The court ignored that the charges against Nafaa were in effect for activity within the context of a Member of Knesset’s (MK) parliamentary immunity, who, according to the law, is permitted to leave and enter the country freely,” the group stated in a news release.

“Israel has had a long-standing policy of fragmentation against Palestinians since the state’s establishment,” Iraqi told Al Jazeera. “Israel has also tried to achieve this fragmentation through a tiered legal-political hierarchy of Palestinians, Israeli citizens, East Jerusalem residents, [and] West Bank residents. The policy has been successful in some practical respects, including separating Gaza from the West Bank, and banning Palestinian citizens from visiting most Arab countries.”

Youssef Jabareen, a Knesset member from the Hadash party, said Israel is using a divide-and-conquer policy to deny Palestinians an identity as one national group.

“It treats Israel’s Christian and Druze minorities as ethnic minority communities at the expense of their Arab identity. Elsewhere in the Arab world, Druze are treated as Arabs with Druze being their religion,” Jabareen told Al Jazeera, noting that in an effort to further this division, Israel developed a separate education system for the Druze in 1976, and applied similar policies to Christian Palestinians.

“Even Israel’s official terminology in Hebrew, there is little reference to Arab nationality or identity, while the term Palestinian is hardly ever heard. Palestinians in Israel are referred to as Israeli Arabs, non-Jews or other minority names,” Jabareen said.

Another method of division, some say, is the compulsory drafting of Druze youth into the Israeli military. Maisan Hamdan, cofounder of the Israel-based independent youth movement, Refuse – Your People will Protect You (Urfod), which encourages Druze youth to refuse to serve in the Israeli military, told Al Jazeera that Druze draftees are regularly put on the front lines in clashes between Israeli security forces and protesting Palestinians, which encourages enmity between the groups.

Recently, though, more Druze have resisted conscription, Hamdan told Al Jazeera: “In the past year and a half, over 80 Druze have refused to serve in the [Israeli military].”

Other Palestinians in Israel, with the exception of the Circassians and Druze, have been exempted from military service since their refusal to enlist in 1954.

Nafaa is not the first Palestinian political activist to be targeted by Israeli authorities for travelling abroad. Other Palestinian members of the Knesset have also been charged in the past with being “foreign agents”, including Balad member Azmi Bishara, who fled Israel after being threatened with imprisonment in 2007 over his travel to Syria. And Majd Kayyal, a Haifa-based activist, was arrested and detained for five days after travelling to Lebanon last year.

“There is a clear contrast between how Israel treats Palestinian versus Jewish citizens for travelling to enemy states. Various Jewish journalists never received such treatment for going to ‘enemy’ states,” Iraqi said.

Israeli Foreign Ministry spokesperson Emmanuel Nachshon, however, told Al Jazeera that Nafaa’s background had nothing to do with the charges.

“The issue has nothing to do with religion or ethnicity, but the reasons people travelled to enemy states,” Nachshon said. “Azmi Bishara met with terror organisations which threaten Israel’s security, and this might have been the case with Nafaa too.” Such allegations were not, however, included in the Israeli court’s findings. 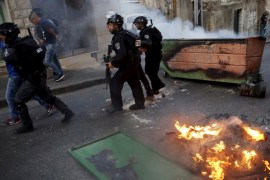 Palestinians in Israel call for strike as protests grow