General Prayuth Chan-ocha, leader of Thailand’s coup, says he has received the endorsement of King Bhumibol Adulyadej formalising his status as head of government, after the armed forces seized power last week.

The army chief gave his first address to the nation on Monday, saying that he will enforce law firmly in order to improve the political situation in the country.

“The most important thing right now is to keep peace and order in the country,” Prayuth said. “When the conflict intensified, and there was the threat of violence, we had to act.”

The ceremony came one day after the military junta repeated warnings that it will crack down on civilian opposition to its takeover of power.

It took over the government with a heavy hand: detaining scores of people, most allied with Yingluck’s government, throwing out the constitution, dissolving the Senate and censoring media, Reuters news agency reported.

Yingluck herself was detained by the military on Friday, but it has relaxed restrictions, allowing her to go home although she is under military supervision, Reuters reported.

Suthep Thaugsuban, who had led seven months of protests and had been detained by the junta since the coup was announced, left a military detention centre on Monday and later appeared at the attorney-general’s office escorted by police and soldiers.

He faces insurrection charges for seizing government ministries and other infractions during his protest bid.

Al Jazeera’s Scott Heidler, reporting from Bangkok, said that Thaugsuban and other top leaders of the anti-government movement were at the attorney-general’s office in what was similar to a “bail hearing” of about $3,000, and will have to go to the criminal court later in the day.

Other lower level members of the movement were also at the office but they will not be going to the criminal court, our reporter said.

The military also ordered dozens of outspoken activists, academics and journalists to report to military authorities. More than 200 have been officially summoned so far in lists broadcast on radio and TV. 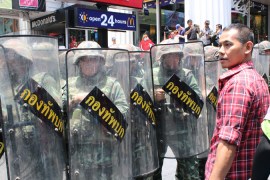 Defying the army’s orders, anti-coup protests are popping up in Bangkok after last week’s military takeover. 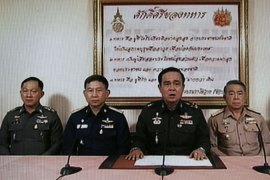 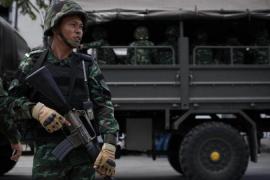 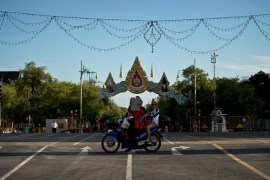