The number of Syrian refugees registered in Lebanon has exceeded one million, in what the UN refugee agency calls a “devastating milestone” for a small country with depleted resources and brewing sectarian tension.

Refugees from Syria, half of them children, now equal a quarter of Lebanon’s resident population, the United Nations High Commissioner for Refugees said in a statement, warning that most of them live in poverty and depend on aid for survival.

“Tiny Lebanon has now become the country with “the highest per capita concentration of refugees worldwide,” and is “struggling to keep pace”, Guterres said in a statement.

“The influx of a million refugees would be massive in any country. For Lebanon, a small nation beset by internal difficulties, the impact is staggering,” he said.

Jan Egeland, the secretary-general of the Norwegian Refugee Council, which has 1,000 relief workers in and around Syria, told Al Jazeera that the figure could easily be “more than half a million” higher.

Egeland said not all of the Syrian refugees in Lebanon had officially registered with the UN, an annual requirement to receive food rations, health and education services – and the process often takes months.

“I don’t think we are understanding the scope and breadth and magnitude of this crisis,” Egeland said.

“This is not just another war, this is a generational challenge and we are not up to meeting that challenge.”

Syria’s three-year war so far has killed more than 150,000 people, according to the Syrian Observatory for Human Rights, while half of the population is estimated to have fled their homes.

Of those who have fled Syria, nearly 600,000 have registered as refugees in Jordan and around 670,000 in Turkey. The UNHCR registers 2,500 new refugees daily in Lebanon.

According to Guterres, “Lebanon has experienced serious economic shocks due to the conflict in Syria”, while security has deteriorated as a result of rising regional instability.

Al Jazeera’s Rula Amin, reporting from Tripoli in northern Lebanon, said the cost of the Syrian crisis to Lebanon had been estimated at $.2.5bn in 2013 alone, not just from aid and providing services.

“It affected tourism, trade investment, even the wages in Lebanon have been affected because Syrians will work for much less,” our reporter said.

The influx has put severe strains on Lebanon’s health and education sectors as well as on electricity, water and sanitation services.

“The Lebanese people have shown striking generosity, but are struggling to cope,” Guterres said.

The UNHCR chief urged the global community to boost its support for Lebanon.

“International support to government institutions and local communities is at a level that, although slowly increasing, is totally out of proportion with what is needed,” Guterres said.

The humanitarian appeal for Lebanon “is only 13 percent funded,” even as the needs of a rapidly growing refugee population become ever more pressing.

“The number of school-aged children is now over 400,000, eclipsing the number of Lebanese children in public schools. These schools have opened their doors to over 100,000 refugees, yet the ability to accept more is severely limited,” he said.

Guterres said the majority of Syrian refugee children, however, were out of school.

Because of the dire economic situation their families endure, many children are now working, “girls can be married young and the prospect of a better future recedes the longer they remain out of school”. 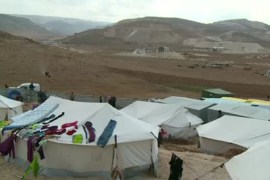 Refugee who set herself ablaze in Beirut after UN cutback remains in hospital, as officials say funding is insufficient. 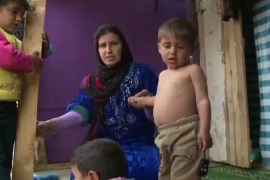 Humanitarian agencies try to contain the situation in Lebanon, where thousands of children suffer from malnutrition. 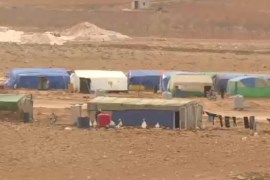 More refugees than Lebanese live in the town of Arsal, forcing new arrivals to live in remote areas.