Thousands of people celebrated in the Crimean capital of Simferopol after the region broke away from Ukraine and was formally accepted into the Russian Federation.

“I am sure that we all together will live in a new Crimea happily, we will live the way our fathers and grandfathers wanted us to live as we dreamed. This is fair and we deserved it. Happy holiday, dear friends,” he said.

I am sure that we all together will live in a new Crimea happily.

The celebrations were timed to coincide with a similar event taking place in Moscow, where fireworks also lit up the skies.

During his visit to Ukraine on Saturday, Germany’s foreign minister Frank-Walter Steinmeier denounced Russia’s “attempt to splinter Europe” for its action in Crimea.

“The referendum in Crimea… is a violation of international law and an  attempt to splinter Europe,” Steinmeier said after meeting Ukraine’s acting president Oleksandr Turchynov.

As this developed, an international team of monitors is being sent in to Ukraine’s eastern region, where tensions continue to brew between supporters and opponents of Russia.

The team from the Organization for Security and Co-operation in Europe [OSCE] will begin its work after Russia dropped its objections. But there is disagreement on whether they will be allowed in to Crimea itself.

A military transition is also underway as Russia takes over bases across the Black Sea Peninsula, raising its national flag as Ukrainian soldiers departed on their trucks.

On Friday, all 155 senators present in Moscow’s upper house of parliament voted in favour of the treaty of accession.

In Brussels, the acting prime minister of Ukraine, Arseniy Yatsenyuk, signed an association agreement with the European Union.

In the Ukrainian capital of Kiev, UN Secretary General Ban Ki-moon called for more diplomatic efforts to stop the crisis from further escalating.

At one of the Crimean border checkpoints, Ukrainian troops reported that nearly a thousand people have left the peninsula in recent weeks, since pro-Russian forces took over key government buildings in Crimea in late February.

Meanwhile, the head of Ukraine’s border guards has visited one of the new defensive positions on the border with Russia. He said troops there were tasked with stopping provocateurs from Russia from entering Ukraine.

The US has said it is wary of Russian assurances over military exercises near the border.

As alliances were made, the EU and the US also announced new sanctions against prominent Russians, including close allies of Putin.

Moscow had announced its own sanctions against senior US politicians in retaliation against visa bans and asset freezes imposed by Washington on its citizens. 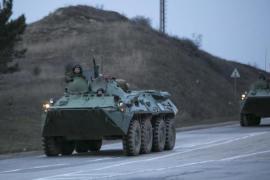 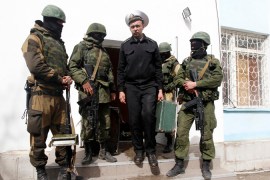 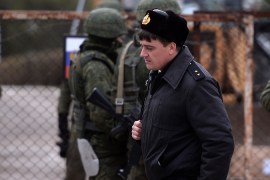 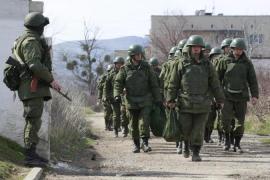