Supporters of deposed Egyptian president Mohamed Morsi, angry over a security crackdown on sit-ins in Cairo, have clashed with security forces in several provinces besides the capital.

The Health Ministry said 278 people were killed nationwide as a result of Wednesday’s violence and another 2,001 people were injured.

The largest number of dead was reported in the province of Minya, south of Cairo, where Health Ministry officials said 41 people were killed.

Six of the dead were policemen, according to Mohamed Abdo, head of the ambulance department.

Elsewhere, Reuters news agency quoted medical sources saying that 15 people were killed in Ismailia in clashes between Morsi supporters and the police.

The Health Ministry said 35 people were also killed in Fayoum, southwest of Cairo, in clashes with security forces.

Another five people were killed in Suez after protesters tried to storm a provincial government office.

The Interior Ministry said several police cars were burned in Beni Suef, a province south of Cairo, and that protesters also set fire to the courthouse.

Police fired tear gas in the Nile Delta province of Sharqiya in clashes with protesters outside of a mosque.

In Aswan, in southern Egypt, hundreds of pro-Morsi demonstrators attacked the local government offices, throwing stones and attempting to break in, according to local media.

Local media reported that the main Coptic Christian church in Sohag, in southern Egypt, was burned, and a church in Minya was also set on fire.

There has been a great deal of sectarian rhetoric directed at Copts in recent weeks during pro-Morsi protests, leading to several incidents of churches burned and Christian-owned businesses attacked.

The Health Ministry said at least 10 people were killed in violence in Alexandria. Hundreds of angry Morsi supporters marched through Egypt’s second city, rioting and armed with wooden clubs, an AFP reporter said.

Chanting “Morsi is my president”, the protesters set fire to car tyres and tore down pictures of General Abdel Fattah al-Sisi, the army chief who was behind the Morsi’s July 3 overthrow.

At one cafe where Sisi’s picture was hanging, they smashed the doors and beat up the patrons as they shouted “Sisi is a killer”.

In the Ibrahimiya district, they stormed a police station and looted furniture and equipment inside, an AFP reporter said.

Earlier, in another part of Alexandria, tear-gas canisters rained down on a pro-Morsi march in the Sharq neighbourhood, amid repeated bursts of automatic gunfire.

Hundreds of Morsi loyalists had marched through the city when police fired tear gas to disperse them.

Residents, armed with clubs, came out of their homes and shops to help the police, detaining Morsi supporters and handing them over to officers at Sharq police station.

Morsi supporters, carrying Egyptian flags and pictures of the deposed leader, then clashed with his opponents on a road carpeted with rocks. 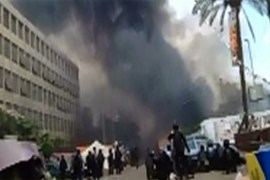 Announcement comes amid security crackdown on pro-Morsi protesters that has left at least 149 people dead nationwide. 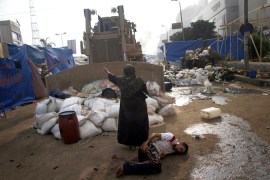 Countries and international bodies express concern, calling for end to violence and restraint from both sides. 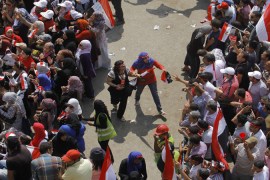 Women at Egypt’s protests often must fight more than the political cause that brought them into the streets. 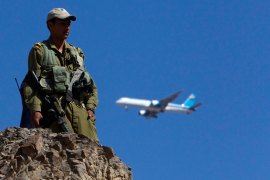 Does the increasing violence in Sinai pose a security threat to Egypt and Israel?