Venezuelan President Hugo Chavez has said medical tests following his cancer treatment show he is in good health, but provided few additional details about an illness that has become an obsession in the South American nation.

The leftist leader’s health is seen a key factor in his re-election bid because a serious relapse could limit his ability to campaign ahead of the October 7 vote and potentially tip the balance toward opposition challenger Henrique Capriles.

The 57-year-old leader, who has undergone three operations for cancer in the pelvic region, said on Sunday he had taken exams including a CAT scan and a magnetic resonance imaging scan as part of scheduled checks.

“This was a few hours ago. Everything turned out absolutely fine,” Chavez said in a chat with reporters at the presidential palace in which he appeared healthy and in good spirits. “After the operation and the radiotherapy, I feel very good.”

He did not comment on whether he would need more treatment or if he planned to return to Cuba, where he has received the bulk of his medical treatment over the past year.

Chavez has steadily increased his public appearances after weeks of keeping a low profile and communicating mostly via Twitter or phone calls to state television as he recovered from gruelling radiotherapy.

But this has done little to quell constant speculation about his health among Venezuelans, many of whom believe his self-styled revolution would struggle to survive in its current form without his charismatic leadership.

On Monday, he will officially register his candidacy amid a rally of supporters that is likely to be his biggest since he announced his cancer diagnosis almost a year ago.

Both sides will be closely watching him for signs of how strongly he will be able to campaign for the upcoming vote.

“I have faith in God, in Christ the Lord, in science and in my will to live so I can continue fighting for this country,” Chavez said, admitting the radiotherapy had been “hard”.

Most of the country’s best-known pollsters show Chavez ahead of Capriles, who on Sunday leads his own campaign rally. Polls show two-thirds of Venezuelans believe Chavez will recover.

While upbeat and at times almost triumphant about defeating the illness, Chavez has avoided repeating last year’s claim that he is “cancer free”. He made that assertion months before he had to return to Cuba for a third operation in the same part of his body as the first two.

His actual condition and capacity to carry on with his typically torrid pace of campaigning are still shrouded in mystery.

News reports that he has only a few months to live continue to surface, as they have periodically since he announced his cancer last June.

One source close to Chavez’s medical team told the Reuters news agency his condition was “delicate” and he had started to experience strong pain in one leg last month due to the illness’ progression.

Reporters, including one prominent opposition journalist, have said Chavez is taking powerful opiates to ease the pain of what they said was cancer that had spread to his bones.

The cancer has given an extraordinary backdrop to the election and is eclipsing all other major factors in the campaign – including an unprecedented push by the opposition to rally behind a single candidate.

Capriles, 39, has burnished his image of youthful vibrancy with a house-to-house get-out-the-vote tour in efforts to contrast himself with the convalescing Chavez. 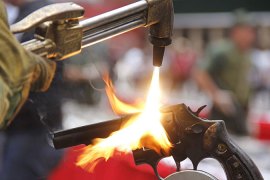 Why is Venezuela so violent?

With 19,000 murders last year, the Latin American country is now considered one of the most dangerous in the world. 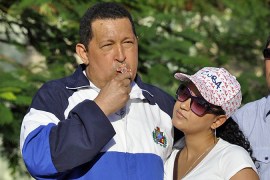 Chavez returns to Venezuela after treatment

President who plans to run in October elections returns from Cuba, where he has been receiving cancer treatment. 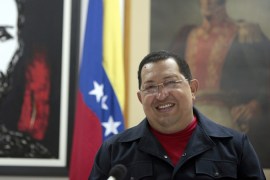 Ahead of October presidential poll, the country’s president insists there was no metastasis after the removal of tumor.