The United Nations has warned Myanmar that the country’s nascent reforms are “likely to be jeopardised” if communal violence in the west of the country, which has left at least 64 people dead in recent days, is not stemmed.

“The vigilante attacks, targeted threats and extremist rhetoric must be stopped,” a spokesman for Secretary-General Ban Ki-moon said in a statement.

“If this is not done, the fabric of social order ]of Myanmar] could be irreparably damaged and the reform and opening up process being currently pursued by the government is likely to be jeopardised.”

Ban was referring to the latest outbreak of violence between Buddhist Rakhine and Muslim Rohingya, which has claimed at least 64 lives and caused the destruction of nearly 2,000 homes in recent days, according to local officials.

Win Myaing, a local government spokesman, said 34 men and 30 women were reported killed on Thursday in four Rakhine state townships in the latest violence, which began on Sunday. He said that the dead were from both sides, and that dozens more people had also been wounded in several days of violence.

Myaing said some 1,900 homes had been burned down in the latest conflict. He revised the death toll from an earlier toll of 112, saying that authorities had “made a mistake in calculating”.

In June, ethnic violence in the state left at least 90 people dead and destroyed more than 3,000 homes. Tens of thousands of people remain in refugee camps.

An Associated Press photographer who travelled to Kyauktaw, one of the affected townships 45km north of the Rakhine capital of Sittwe, said he saw 11 wounded people brought by ambulance to the local 25-bed hospital, most with gunshot wounds.

One was declared dead after arrival. All the victims being treated were Rakhine, but that could reflect an inability or unwillingness of Rohingya victims to be treated there.

A male volunteer at the hospital, Min Oo, said by telephone that five bodies, including one of a woman, had also been brought there. He said the injured persons were brought by boat from Kyauktaw town 16km away, and taken from the jetty by the ambulances.

An account by a Rakhine villager in the area suggested great confusion and tension. The villager said that when groups of Rakhine and the Rohingya had a confrontation, government soldiers shot into a crowd of Rakhine, even though, according to his claim, the crowd had been dispersing. The villager would not give his name for fear of violent reprisals.

There have been concerns in the past that soldiers were failing to protect the Rohingya community, but the Rakhine villager’s account hints that the military may have been defending the Rohingya in this case.

Tensions still simmer in part because the government has failed to find any long-term solution to the crisis other than segregating the two communities in some areas.

The United Nations called for calm on Thursday in response to the new violence.

“The UN is gravely concerned about reports of a resurgence of inter-communal conflict in several areas in Rakhine State – which has resulted in deaths and has forced thousands of people, including women and children, to flee their homes,” UN Resident and Humanitarian Co-ordinatorin Myanmar Ashok Nigam said in a statement.

Nigam said the United Nations was appealing for “immediate and unconditional access to all communities in accordance with humanitarian principles”.

“Short term humanitarian support and action towards long term solutions are urgently required to address the root causes of the conflict,” said the statement.

The unrest is some of the worst reported in the region since June, after clashes were set off by the alleged rape and murder of a Buddhist woman by three Muslim men in late May.

The United States has also called for an immediate end to the communal violence.

Victoria Nuland, a US state department spokesperson, said on Thursday that Washington “urges parties to exercise restraint and immediately halt all attacks”.

“We join the international community and call on authorities within the country – including the government, civil and religious leaders – to take immediate action to halt the ongoing violence,” Nuland said.

She urged the authorities “to grant full humanitarian access to the affected areas and to begin a dialogue towards a peaceful resolution ensuring expeditious and transparent investigations into these and previous incidents”.

The crisis in Myanmar’s west goes back decades and is rooted in a dispute over where the region’s Muslim inhabitants are from. Although many Rohingya have lived in Myanmar for generations, they are widely denigrated as foreigners – intruders who came from neighbouring Bangladesh to steal scarce land.

The UN estimates their number at 800,000. But the government does not count them as one of the country’s 135 ethnic groups, and so – like neighbouring Bangladesh – denies them citizenship.

Human rights groups say racism also plays a role: Many Rohingya, who speak a distinct Bengali dialect and resemble Muslim Bangladeshis, have darker skin and are heavily discriminated against.

The conflict has proven to be a major challenge for the government of President Thein Sein, which has embarked on democratic reforms since a half century of military rule ended in 2011. 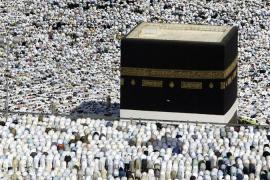 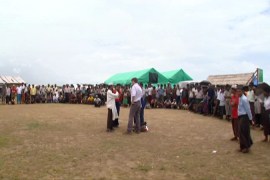 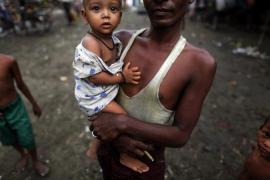 Isolated in refugee camps, the Rohingya have little opportunity to tell their story.