The Haitian victim of an alleged sexual assault by UN peacekeepers has spoken to Al Jazeera, disputing a statement from Uruguayan prosecutors that he is unreachable.

Eduardo Fernandez Dovat, the prosecutor in Uruguay, had said he may shelve the abuse case against six UN peacekeepers from Uruguay, accused of raping 19-year-old Johnny Jean.

Dovat said authorities could not get Jean to testify, but the Haitian, in a face-to-face interview with Al Jazeera, denied that.

“If they wanted to find me, they could find me,” Jean said. “No one came to look for me. What do you mean they say they can’t find me?”

Jean told Al Jazeera he wanted his identity to be known so that his side of the incident is known.

Al Jazeera’s Andy Gallacher, reporting from the Haitian capital Port-Au-Prince, said: “With just a few phone calls we’ve managed to find his family, literally five minutes from the hotel where the international press camp out.”

The former peacekeepers from Uruguay face a military trial on charges of violating rules against fraternising with civilians inside military bases.

A separate investigation into abuse charges is being conducted by a civilian criminal court, but that can only go to trial with the victim’s co-operation, a Uruguayan prosecutor said this week.

Jorge Menendez, Uruguay’s vice minister of defence, said last week that authorities had tried repeatedly to obtain the man’s testimony, either by bringing him to Uruguay or having him answer questions remotely.

They say they haven’t heard from him since his lawyer demanded a $5m settlement, which Uruguayan authorities said was not possible.

Eleuterio Fernandez Huidobro, Uruguay’s defence minister, who together with Uruguayan President Jose Mujica apologised to Haiti for the incident, said earlier that Uruguay would compensate the alleged victim.

The six Uruguayan marines were expelled from Haiti in September and jailed at home while military and civilian prosecutors investigated allegations that the man had been raped after his peacekeeper friends invited him inside their base in the town of Port Salut.

The soldiers initially called the incident a prank that got out of hand.

But video footage of the alleged assault spread via mobile phones angered many Haitians, and gave ammunition to those who have been demanding a departure by the UN mission, known as MINUSTAH.

“I have to find justice,” Jean’s mother told Al Jazeera. “My son can no longer live among people. He’s been humiliated. He no longer has any value. He can’t go to school here – he’s in hiding.”

Word of the peacekeepers’ release prompted fresh declarations of outrage on Monday by human rights activists in Haiti. 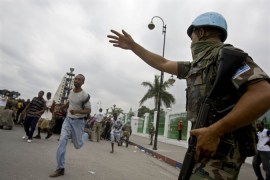 Rape case against six UN peacekeepers could be shelved, prosecutor says, over lack of testimony from alleged victim. 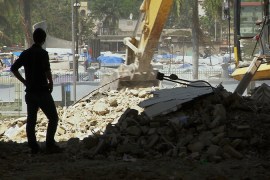 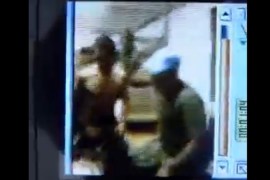