Hamas has opposed Fatah’s nomination of Salam Fayyad for the post of prime minister in a transitional Palestinian government, exposing differences over implementing a Palestinian reconciliation deal between the rival groups.

But on Sunday, two days before talks with Fatah in Egypt on cabinet staffing were due to begin, Salah al-Bardaweel, a senior Hamas official, said: “It is certain that we will not accept Fayyad, neither as a prime minister of the unity government nor as a minister in it.”

Bardaweel accused Fayyad of co-operating with Israel’s blockade of the Gaza Strip. He said that Fayyad, as prime minister, shared responsibility for the arrest of Hamas leaders and members in the West Bank in recent years.

Asked whether Hamas’s rejection of Fayyad would hinder reconciliation, Bardaweel stopped short of declaring the deal dead but he cautioned against any cabinet nomination that would be seen by any side as a provocation.

Jamal Mhesen, a Fatah Central Committee member, said Fatah wanted a prime minister who could attract international support – a leader “whose job would be to end the blockade of Gaza, not to cause a blockade in the West Bank, too”.

Supporters of Fayyad, an independent, say his standing abroad is an asset to the Palestinians in ensuring the continued flow of international aid and in pursuing a bid for UN statehood recognition in September.

But Israel has said the reconciliation agreement signed in April is an obstacle to reviving US-sponsored peace talks with Mahmoud Abbas, the Palestinian president and Fatah leader, whose forces lost control of the Gaza Strip to Hamas in fighting in 2007.

Under the unity deal, Hamas and Fatah agreed to set up an interim government of technocrats, or ministers who are not members of any political movement, in the run-up to elections within a year.

Binyamin Netanyahu, the Israeli prime minister, called on Abbas to tear up the agreement with Hamas, which has rejected Israeli and Western demands to recognise Israel, renounce violence and accept existing interim peace deals signed by the Fatah-led Palestine Liberation Organisation in the 1990s.

Meanwhile, Mohammed Dahlan, Fatah’s strong-man in the Gaza Strip, has been expelled from the faction.

“The Fatah Central Committee has decided to dismiss Mohammed Shaker Dahlan and end any official connection of his to the movement … It has also decided to refer him to the judiciary over criminal and financial cases,” part of the statement said.

Dahlan first fell from grace in 2007 when Hamas routed Fatah forces to take control of the Gaza Strip. As security chief he had been charged with keeping Fatah dominant in the coastal territory.

Palestinian officials, speaking anonymously, have said Dahlan in the past publicly slurred Abbas’s sons and criticised the Palestinian president, going as far as calling for his replacement.

Dahlan confidants said he could now further inflame his row with Abbas by speaking publicly on the dispute.

“He has lots to say about the Fatah Central Committee and Abu Mazen (Abbas) personally,” one aide said. 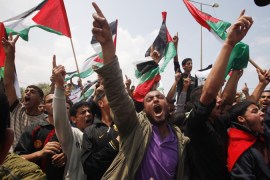 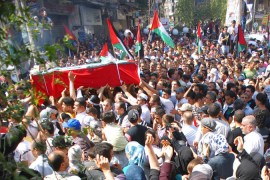 Human rights chief “deeply troubled” by Israel’s use of live fire against civilians in the Golan Heights, urging probe. 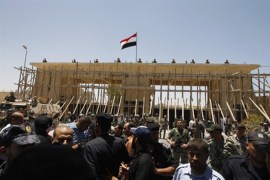 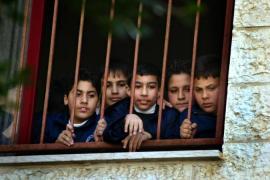