Several people have reportedly been arrested following clashes in Jerusalem as Palestinians gear up to mark the 63rd anniversary of the “Nakba”, or “day of catastrophe”.

Every year Palestinians commemorate what they call “Nakba Day”, when an estimated 700,000 Palestinians fled or were expelled following Israel’s 1948 declaration of statehood.

Israeli security forces have been placed on high alert for possible riots or violence in Jerusalem, the West Bank and Arab communities in Israel ahead of the annual Palestinian day of mourning.

But on Saturday there were clashes in East Jerusalem between stone-throwing Palestinians and Israeli police, and several Palestinians were arrested, witnesses said.

An activist in Silwan tweeted on Saturday that fresh clashes had broken out near the al-Aqsa mosque, with Israeli soldiers being wounded from a Molotov cocktail and two Palestinians hit by rubber bullets.

Witnesses and several medical officials said police fired rubber bullets at stone-throwing youths, with some saying that as many as 30 were injured.

Amid the clashes, mourners filled the streets of East Jerusalem for the funeral of a Palestinian teen wounded during clashes a day earlier.

Seventeen-year-old Morad Ayyash was shot in the shoulder in the neighbourhood of Silwan on Friday, Israeli police said.

Israeli police spokesman Micky Rosenfeld said the source of gunfire was unclear and that the police were investigating, while a relative told the AFP news agency that a Jewish settler had shot Ayyash in the stomach.

Local sources in Silwan told Al Jazeera that only tear gas was used in the clashes that erupted between Palestinian boys and the Israeli police on Friday.

Ayyash was shot in random firing of live ammunition by guards of Jewish settlers living in Beit Yonatan, they said.

Amid the heightened tension in Jerusalem, protests also took place in neighbouring Jordan and Egypt in support of Palestinians marking the Nakba.

A convoy of 35 buses headed for the Gaza Strip is scheduled to leave the Egyptian capital on Saturday, carrying protesters calling for the end of the “Israeli occupation of Palestinian land” and “the right of return of Palestinian refugees and the release of all Palestinian prisoners”.

But Egyptian authorities pre-emptively blocked access to the Sinai peninsula on Friday including the “Peace Bridge”, one of the main access routes from mainland Egypt to Sinai, which was closed to all but the peninsula’s residents.

Al Jazeera’s Rawya Rageh, reporting from the Egyptian capital, Cairo, said: “Activists are gathering in Tahrir Square because they are finding it rather difficult to proceed with their march to the Gaza Strip.”

Mohamed Waked, organiser of the convoy, said the bus company pulled out on Saturday citing fear of threats from Egypt’s ruling military council.

Waked said the council was breaking the law by denying Egyptians their “constitutional right to mobility … to wherever in Egypt”.

He said some protesters would try to reach the Gaza Strip via public transportation, but the rest would instead demonstrate in Cairo and in front of the “Peace Bridge”.

He added that a few people had already managed to cross the Rafah Crossing into the Gaza Strip, “despite the ban”.

Inside the Gaza Strip, the ruling Hamas movement has organised a children’s protest in the centre of Gaza City for Saturday, while the Palestinian Liberation Organisation is calling for a mass rally in the strip’s Bureij refugee camp.

A protest and a vigil is scheduled to take place in front of London’s 10 Downing Street, office and residence of the UK prime minister David Cameron.

Various events are scheduled in the West Bank including a “volunteer work day” at a Palestinian village near Bethlehem.

It is unclear whether Muslim worshippers will continue to be denied entry to Jerusalem’s Old City and the al-Aqsa compound for the second day, as Israeli police limited access on Friday only to men over 45 with Israeli identification cards. 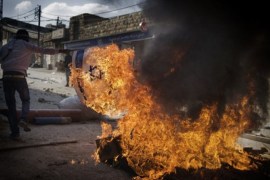 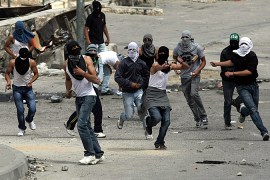 Clashes in East Jerusalem ahead of Nakba day

Arrests as Palestinians prepare to mark “day of catastrophe” on anniversary of Israel’s 1948 declaration of statehood.