Ghana has in recent years been cast as an African success story, having a stable democracy where the level of poverty has halved over the last 15 years.

John Kufuor, a former Ghanaian president, told Al Jazeera Obama was “coming to Ghana as a beacon of good governance [and] democratic practice”.

“He wants to come here so as to encourage other countries in Africa to go in the direction of Ghana,” he said.

West Africa’s abundance of natural resources and the recent discovery of oil in Ghana is also believed to be a factor behind Obama’s trip.

Obama and his wife Michelle are also expected to visit Cape Coast Castle, a former slave trading post which lies about 160km west of the capital.

The authorities in Cape Coast have suspended funerals ahead of Obama’s visit.

“We banned all funeral activities in Cape Coast because we want to give a befitting welcome to the US president.

“Obama is here for once and we must pay all attention to him.”

Other African countries have been disappointed that Obama is not visiting them, with Kenya’s The Nation newspaper saying the US president had made a “public snub” to the country, considering that Obama’s ancestors were Kenyan.

But it said that the Kenyan government had sent out a wrong image to Obama, limiting any chance that he would come to the country soon.

“It is the view of every Kenyan, who is appalled by the inertia in government. Few things have been done to redress the past wrongs,” the paper said, referring to deadly post-election violence last year.

In South Africa, people said Obama ought to visit their country to better understand the African continent as a whole.

“If he wants to know about Africa, he should come here,” Paul Marume, a security guard in Johannesburg, South Africa, told the AFP news agency.

“I am disappointed he went to Ghana, first because everyone wants to meet [former president] Nelson Mandela … Secondly, we play a central role in Africa in terms of conflict resolution.” 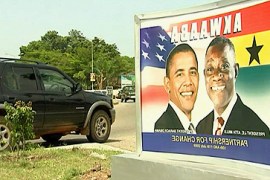 US president set to receive a warm welcome in the West African nation. 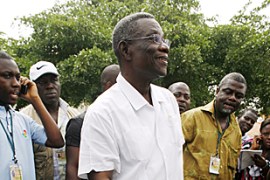 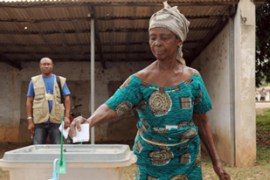 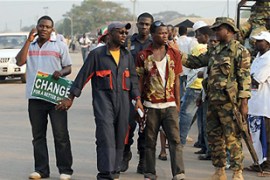