China’s export manufacturing industry has been reeling from the impact of the global downturn, with thousands of factories halting production raising fears of widespread unemployment and social unrest.

The Chinese government has pledged a stimulus package of more than $500bn aimed at encouraging domestic spending to fill some of the gap left by plunging export demand.

Last month China’s premier, Hu Jintao, said the government was ready to step in with more money if it was needed to prop up the economy.

In other economic news, China’s beleaguered dairy sector is appealing for financial aid from the government.

The industry suffered from plunging demand at home and abroad following last year’s tainted milk scandal, which killed at least six babies and left tens of thousands others ill. 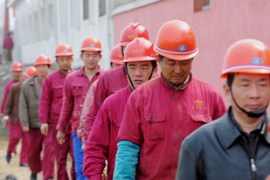 Growth forecast to 6.5 per cent on falling exports, but says fundamentals still strong.