Our correspondent said the hostages are all thought to be military personnel, including five high-ranking officials.

Troops have surrounded the building and are preparing to storm it, he said.

“The special forces are tightening the noose around the building,” Hyder said.

Major General Athar Abbas, the Pakistani army spokesman, told Al Jazeera: “Right now the situation is that four to five terrorists are holding 10 to 15 hostages inside the building.

“This has gone beyond the act of terrorism; it is now a hostage situation. I do not want to disclose any further details because we do not want to jeopardise the lives of the hostages,” he said.

Mohammed Jamil, a police official, said the attackers drove up to the army compound in a white van shortly before noon, and tried to force their way inside before being challenged by soldiers.

The attackers jumped out of the vehicle, took up positions throughout the area and began firing at the troops, he said.

One attacker hurled a grenade, and others fired sporadically at those manning the checkpoint at the compound’s entrance, a senior military official inside said.

At least six soldiers and four of the attackers were killed in the gun battle, the army said.

Officials earlier said that two of the attackers had escaped, but later claimed that one of them had been arrested.

A faction of the Pakistani Taliban known as Amjad Farooqi claimed responsibility for the Rawalpindi attack, reports in the local media said.

The group’s named is taken from that of a fighter who is suspected of masterminding a number of attacks inside Pakistan.

Pakistan’s intelligence agency has said Farooqi was involved in the murder of Daniel Pearl, an American journalist who was killed in 2002.

The Rawalpindi attack came a day after a suspected suicide car bomber killed 49 people in the northwestern city of Peshawar in an attack the government said underscored the need for an all-out offensive.

In a telephone call made to a local media channel, a member of the Pakistani Taliban threatened aid groups operating in the country and asked that they leave Pakistan.

Pakistan has been fighting an ever-intensifying campaign against al-Qaeda-linked Taliban and groups linked to al-Qaeda. 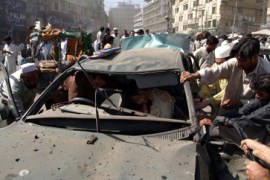