“Settlement makes the creation of a viable Palestinian state impossible,” he said.

“The only path to Israel’s security is peace and it is time for Israel to understand that it cannot continue to exempt itself from behaving in accordance to international law,” Prince Saud said.

The Palestinian Authority, Saudi Arabia and the Arab League urged the UN Security Council to encourage the faltering peace process by demanding an end to Jewish settlements on Palestinian land.

The Middle East diplomatic Quartet on Friday pressed Israel and the Palestinians to seal a peace deal this year, but also expressed “deep concern” over continuing settlement expansion in the West Bank.

A ministerial session of Quartet members, the US, Russia, the European Union and the UN, ended with a call on the parties “to make every effort to conclude an agreement before the end of 2008”.

Quartet members “expressed deep concern about increasing [Israeli] settlement activity, which has a damaging impact on the negotiating environment and is an impediment to economic recovery and called on Israel to freeze all settlement activity.”

They also reiterated that the parties “must avoid actions that undermine confidence and could prejudice the outcome of the negotiations”.

In Annapolis, Maryland last November, Israel and the Palestinians revived negotiations toward resolving core problems such as the status of Jerusalem, the borders of a future Palestinian state and refugees, by the end of 2008.

“The situation necessitates a serious stand by the international community and a clear call upon Israel to begin withdrawing its settlers and dismantling its settlements,” Abbas said.

“It was recognised [in Annapolis] that this was a prerequisite for allowing negotiations towards ending the conflict to progress,” he said.

But Gabriela Shalev, Israel’s UN Ambassador, told council members that while the settlements are a “delicate issue,” they “are not an obstacle to peace”.

“They have been used here as another instrument to bash Israel instead of addressing the realities on the ground,” she said.

“There is much that those in the region can do to support that peace process, but it is not about more UN meetings.

“It is, first and foremost, about commitment to prepare the people of the region for the price of peace, to accept the true meaning of peace,” Shalev said.

The West Bank has been under military occupation by Israel since 1967 and at least 400,000 Israelis have been settled in the territory, including East Jerusalem.

The settlements are illegal under international law, although Israel disputes this.

Bernard Kouchner, the French foreign minister, whose country currently chairs the European Union, restated the EU view that Israeli settlements, “wherever in the occupied Palestinian territories, are illegal under international law.”

He added that settlement “harms the credibility of the process started in Annapolis and affects the viability of the future Palestinian state.”

Condoleezza Rice, the US secretary of state, shifted the focus of the debate away from settlements, instead urging Arab countries to “consider ways they might reach out to Israel”.

Meanwhile, a group of 21 leading aid agencies said on Thursday that the Middle East Quartet was “losing its grip” on the peace process and must radically revise its approach.

The aid agencies said the Quartet has failed to hold Israel to account for expanding settlements in the West Bank. 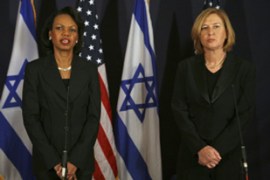 US secretary of state says settlement activity has “negative effect” on peace talks. 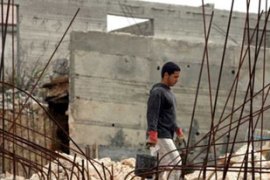