Witnesses said both sides were locked in a tense standoff for about half an hour before security forces moved in, detaining ten of the protesters who were driven away in a truck.

Activists say there have also been other demonstrations in other cities with increased numbers of security personnel deployed on the streets.

Accurate reports from across Myanmar are hard to obtain, but in an email statement on Thursday afternoon the Asia-Pacific People’s Partnership on Burma (APPPB) said it had recieved information that about 2,000 members of the security forces had been deployed in the city hall area of central Yangon.

The Thailand-based group also said it had received reports of several smaller protests being violently broken up.

Eight protesters accused of being agitators were taken away, but they were later freed unharmed.

Pro-democracy groups say at least 10 others have been jailed since.

On Sunday, in what was the largest protest in Yangon in nearly a decade, about 400 people joined a silent march against the price rise, led by mostly former student leaders from the 1988 democracy uprising.

In the wake of that protest at least 13 leading activists were arrested and could face up to 20 years in prison, state-controlled media reported.

Speaking to Al Jazeera on Thursday Myint Soe of the National League for Democracy (Liberated Areas) said the situation in Yangon remained tense with tight security across Yangon.

“In many places they are patrolling with full equipment… armed with shields and guns,” he told Al Jazeera, speaking from Thailand.

Myint Soe said another three people were arrested on Wednesday afternoon but could not confirm their location.

Leaders of the 88 Generation Students were at the forefront of a pro-democracy uprising in 1988 which was suppressed by the military.

Most were subjected to lengthy prison terms and torture after the uprising.

The 1988 uprising was preceded by public protests over rising rice prices, a sudden government declaration that made most currency invalid, and other economic hardships.

Mie Mie, a member of the 88 Generation group who remains on the run, said they “will not fear any arrest or threat” and vowed to continue protests against the fuel price rises despite the arrest of leading activists.

The crackdown in Myanmar has sparked an angry reaction from several Western governments calling for the immediate release of all detained activists.

Gonzo Gallegos, a US State Department spokesman, urged Myanmar to engage in “meaningful dialogue” with pro-democracy leaders and ethnic minority groups, and to take “tangible steps toward a transition to civilian democracy rule”.

Speaking in Washington he called for “an end to the regime’s blatant attempt to intimidate and silence those who are engaged in peaceful promotion of democracy and human rights in Burma“.

In Paris the French foreign ministry said it was concerned by the use of force by “pro-government militias” against the protesters in Yangon.

And in Canada Maxine Bernier, the country’s foreign minister, said the arrests were another example of the Myanmar authorities’ “continued disregard for freedom and democracy”. 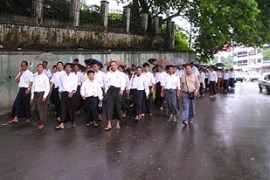 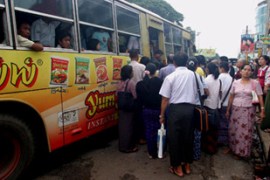