Rice said that details of the state department security review and what it would entail would be provided later on Friday by Sean McCormack, her spokesman.

An aide to Nuri al-Maliki, the Iraqi prime minister, said that the Iraqis were considering allowing Blackwater and other Western security companies continue operating in Iraq but under strict new rules that would bring them under tighter control.

Their operations had been halted after last Sunday’s incident in which guards protecting a convoy opened fire in response to an alleged attack.

Iraqi civilians, some children, were among the 11 people killed in the firefight.

Iraqi officials have called the incident “criminal” and initially ordered Blackwater’s expulsion from the country.

“We take very seriously what happened,” Rice said, speaking at a joint news conference with Bernard Kouchner, the visiting French foreign minister at the state department.

Rice had no comment about Friday’s resumption of Blackwater-protected convoys but paid tribute to the guards from the firm, one of three that provides security for US diplomats and other civilian government officials in Iraq.

The United States and Iraq have agreed to form a joint commission to look into Sunday’s incident and make recommendations to clarify confusing rules and regulations that govern the conduct of private security contractors in Iraq.

Mirembe Nantongo, the  US embassy spokeswoman in Iraq, said the decision to resume land travel outside the heavily fortified Green Zone was made after consultations with the Iraqi government.

She said the convoys will be limited to essential missions, but declined to comment on the various versions of last Sunday’s incident, pending completion of the joint US-Iraqi investigation.

A senior official on al-Maliki’s staff said the Iraqi government realises that it may not be able to push through a ban on Blackwater USA because the Americans rely so heavily on security firms.

The official spoke on condition of anonymity because the issue is politically charged.

Several options were being studied, including a new set of regulations and rules of engagement for security convoys, the official said.

He gave no details but said security companies would have to “accept Iraqi law,” and Blackwater would likely have to pay compensation to the victims or their survivors.

The US must also accept amendments to a 2004 directive, issued in the final weeks of the American occupation, which granted contractors, US troops and many other foreign officials immunity from prosecution under Iraqi law, he said.

Security contractors are also not subject to US military law under which US soldiers face prosecution for killing or abusing Iraqis.

The al-Maliki aide said some of the Blackwater guards believed to have been involved in the shooting were Iraqis and could face prosecution in Iraqi courts.

In another sign that a deal may be in the works, Hadi al-Amri, a prominent Shia politician and chairman of the parliamentary security committee, said one way out of the stalemate would be for the company to admit wrongdoing, apologise and pay compensation.

“They are always frightened and that’s why they shoot at civilians,” al-Amri said.

“If Blackwater gets to stay in Iraq, it will have to give guarantees about its conduct.”

Al-Maliki is expected to discuss the issue when he meets George Bush, the US president, next week. 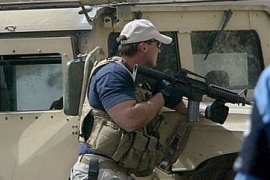 We look at the controversy surrounding the private security company Blackwater.

Move comes after Iraq tells US security firm to get out over civilian shooting deaths.

Announcement follows decision to “halt the licence” of US-based Blackwater.

Blackwater security banned from operating in Iraq after shooting incident.