Two German engineers were reported kidnapped along with five Afghans in the Wardak province earlier this month by the Taliban.
One of them, Ruediger Diedrich, 43, died while in captivity under unclear circumstances. His body has been flown back to Germany for an autopsy to determine the cause of death.
The body of one of the Germans was found with bullet wounds, and one of the Afghans managed to escape.
The rest are still being held.
At gunpoint

In the video, Rudolph appeared against a rocky backdrop in a hilly area. The soundtrack of the video was not aired.

One of the captors pointed a rocket-propelled grenade launcher at him. Rudolph appeared to be unharmed.
Al Jazeera obtained a similar video showing four Afghan companions of Rudolph.
The German government has set up a crisis team in Berlin, while the German embassy in Kabul is working with security forces on the ground.
There are reports that negotiations are being held with the kidnappers, with members of a local tribe in the Ghazni province acting as mediators.
Source: Al Jazeera, News Agencies 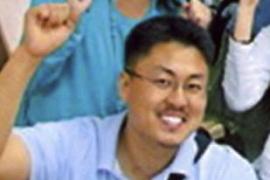