Tony Blair says he sees a “sense of possibility” for success in his new role as a Middle East peace envoy and is keen “to listen, to learn and to reflect” in his talks with Israeli and Palestinian leaders.

The former British prime minister was making his first public comments since he began his new role as the Quartet’s envoy on Monday.

“I think that even from the conversations I’ve had there is a sense of possibility,” Blair told a news conference on Tuesday after meeting Shimon Peres, the Israeli president.

“But whether that sense of possibility can be translated into something — that is something that needs to be worked at and thought about over time,” he said.

For his part, Peres said: “I think there is a serious window of opportunity to advance peace”. But he said he feared the window would not remain open for long.

Following the very short press conference with Peres, Blair has now moved on to Ramallah where he will meet with Mahmoud Abbas, the Palestinian president.

He will then return to Jerusalem for dinenr with Ehud Olmert, the Israeli prime minister.

The Quartet, comprising the US, EU, UN and Russia, has asked Blair for an initial plan for building ruling institutions needed to establish a viable Palestinian state alongside Israel by September.

However diplomats say his limited mandate could expand into a more direct peacemaking role between the parties.

Blair’s mission is complicated by the split between Hamas, who currently control Gaza, and Abbas’ Fatah faction, who are in charge of the West Bank.

Rula Amin, Al Jazeera’s correspondent in Ramallah, says Hamas officials insist Tony Blair has to talk to them in some way else he is guilty of double-standards. 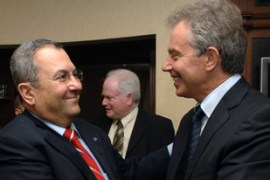 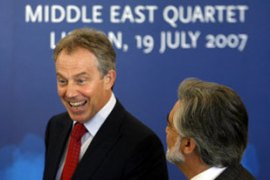 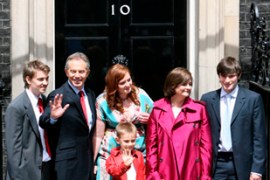