As Duch appeared in court on Tuesday, he was surrounded by cameramen and photographers eager to see one of the Khmer Rouge’s most notorious figures.

Al Jazeera’s David Hawkins who was in the court room said Duch spoke softly as he addressed the court, describing himself as a teacher.

“I am appealing because I have been jailed without trial for eight years, six months and 10 days already,” he said.

Our correspondent says several survivors of the Khmer Rouge regime came to watch the proceedings in the court room and by video link in an auditoreum nearby.

The hearing was also broadcast live on Cambodian television.

The case is the first time a former Khmer Rouge official has appeared in public in court and the first open hearing held by the tribunal since its creation last year.

Duch’s lawyers say holding their client in custody without trial for more than eight years violates Cambodian and international human rights laws, saying he has promised to cooperate fully with the tribunal.

However, prosecutors say Duch’s freedom would risk creating public disorder and he may attempt to flee justice.

The hearing is also being seen as a test of the tribunal’s credibility, coming almost three decades since the Khmer Rouge was forced from power.

Many survivors and families of Khmer Rouge victims have said they feared the surviving regime leaders might die before being brought to justice.

“This first hearing means so much,” tribunal spokesman Reach Sambath told reporters as Duch’s case was heard on Tuesday.

“It will make the critics of the tribunal have confidence in the court and
the government in bringing these leaders to justice.”

Duch is one of five former senior Khmer Rouge officials being held awaiting trial on war crimes and crimes against humanity.

On Monday Khieu Samphan, the Khmer Rouge’s former head of state, became the latest suspect to be arrested and brought before the tribunal. 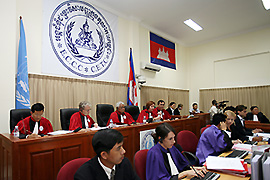 He was charged with war crimes and crimes against humanity.

The actual trial process of former Khmer Rouge members is expected to begin early next year.

During the Khmer Rouge’s four years in power between 1975 and 1979, Duch was head of the feared “Santebal” internal security police.

He also ran the S-21 torture and interrogation centre in a former Phnom Penh high school, one of several such centres across Cambodia.

Some 17,000 suspects are through to have passed through S-21, most of them tortured to death or sent for execution in the so-called “killing fields” outside the Cambodian capital.

Many were killed by soldiers using bamboo poles to smash their victims’ skulls because the Khmer Rouge wanted to save on bullets.

Several children were also executed, because of their parent’s alleged counter-revolutionary activities.

In total as many as two million Cambodians are thought to have died under Khmer Rouge rule, most through starvation, overwork or execution.