“We need once and for all to stop the vicious cycle,” Olmert said, “so that we might not once again have to tell ourselves how shortsighted we were not to have seized this sliver of opportunity that might have presented itself.”

Olmert said that in his recent meetings with Abbas nothing had been agreed by either side, but an atmosphere of trust had been established.

“I believe that they want to move ahead together with us on a route that will bring about a change in the reality of relations between us and them,” he added, referring to Abbas and Salam Fayyad, the Palestinian prime minister.

Olmert acknowledged that there was a gulf between Abbas’ and Fayyad’s intentions and their ability to get their people behind a peace agreement.

Palestinians have recently been saying exactly the same about the Israeli leadership.

Nevertheless, he said his government was obligated to seek an end to the dispute.

“I want to serve notice here, in the most resolute way possible, that I do not intend to look for excuses to block peace efforts,” Olmert said.

In his speech, at the opening of parliament’s winter session, Olmert said Israel would have to give up some of its deepest desires, an apparent reference to vacating Israeli settlements in the West Bank, and added that the Palestinians “will have to deal with the need to concede part of their dreams in order to build with us a realistic, if not ideal, if not perfect” future of peace and security.

As Olmert spoke, opposition MPs shouted for him to declare whether or not he intends to cede to the Palestinians sovereignty over parts of east Jerusalem, which they claim as the capital of a future Palestinian state and which were occupied by Israel in 1967. 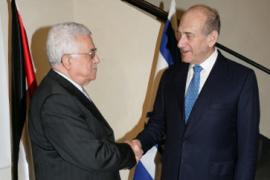 Earlier on Monday, Olmert confidant Haim Ramon said the government was prepared to divide the city, signalling a shift in Israeli thinking on one of the most sensitive issues in the conflict.

Hardline Israeli MPs, and much of the public, oppose any division of Jerusalem, which is home to Jewish, Christian and Muslim holy sites.

Past peace talks have broken down over the fate of Jerusalem, and Ehud Barak, the former prime minister, was criticised when he considered sharing the city during failed negotiations in 2001.

Following Olmert to the podium, opposition leader Benjamin Netanyahu said giving Palestinians control over east Jerusalem would pose a deadly threat to the Jews living in the western part of the city.

“Handing over holy sites from Israeli control will not bring peace but the opposite,” he said.

“If Israel leaves, it will open the door to al-Qaeda.”

“Everyone, including Mr Olmert, realises that time is of the essence, and that it’s time for decisions,” he said.

As Olmert spoke on Monday, Israeli and Palestinian negotiating teams were meeting to begin work on a joint document, which they hope to present at a US-hosted Middle East peace conference in November.

The sides hope the document will outline a joint vision of a future peace deal.

Olmert said the November meeting was meant to compliment direct Israeli-Palestinian negotiations, not replace them.

Olmert and Abbas order drafting of principles that will guide future negotiations. 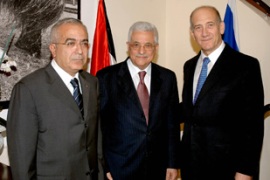 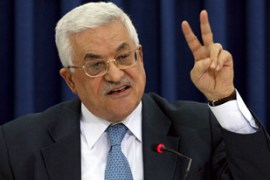