Ozawa, who is pushing for an early general election, has said that Japan should not be part of “American wars”.

“I told him that I cannot approve of it,” Ozawa said.

“We need to have principles, which means that unless it’s part of UN operations, it would not be possible.”

Fukuda argues that Japan, as the world’s second largest economy, must play a greater role in global security. Shinzo Abe, his predecessor, abruptly resigned last month, partly because of his failure to extend the mission.

Japan‘s so-called pacifist constitution forbids its armed forces from carrying out anything but defensive missions, but the government has been trying to revise legislation allowing for a more active defence policy.

The last ship refuelled by the Japanese support mission was a Pakistani navy destroyer.

As they carried out the final operation about 70 crew members from the supply ship Tokiwa appeared on deck, cheering and singing the Japanese national anthem, Japan’s Kyodo news agency said.

Japan is a major US ally in Asia and has refuelled warships supporting US-led forces in Afghanistan since 2001.

Washington has been urging the Japanese government to extend the mission.

A recent survey by Kyodo found that 46.4 per cent of the Japanese public supported the naval deployment and 42.9 per cent were opposed, with the rest undecided.

Some analysts said that the suspension of the mission showed how Fukuda’s Liberal Democratic Party had been weakened.

“I think the United States, Europe and other nations understand the snag came due to domestic politics, not a change of course by Japan as a whole,” Takehiko Yamamoto, a security expert at Waseda University, said. 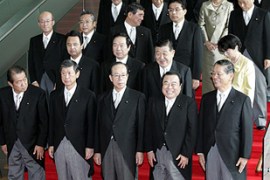 Fukuda sworn in as Japan PM