The Palestinian president has accused Israel of blocking the Middle East peace process, saying Israeli aggression and plans to build another settlement in Jerusalem were obstacles to peace.

Mahmoud Abbas said he would not attend forthcoming US-sponsored peace talks unless they looked like they would yield results.

“Time must not be lost because that’s not in anyone’s interest. We cannot go to the meeting at any cost. It is unacceptable to go there at any cost,” he said after talks with Condoleezza Rice, the US secretary of state, for the second time in two days.

Rice completed her visit to the Middle East with little progress made over setting a date for a summit the US hopes could provide a serious step towards Palestinian statehood.

However, the US secretary of state said she thought the latest round of diplomacy had a “reasonable chance of success” of bringing peace between Israel and the Palestinians.

Speaking at a news conference with Tzipi Livni, the Israeli foreign minister, Rice said the meeting, planned for November or December in Annapolis in the US, would be substantive and said: “I don’t expect anybody to attend at any cost, including us.”

“We are at the beginning of a process,” Rice said. “If we work hard to resolve these issues, I think we have a reasonable chance of success in moving forward on the vision of two states living side by side in peace and freedom.”

Abbas said Israel and the Palestinians should agree on a “clear document” that would provide the basis of a future peace treaty to end their decades-old conflict.

Abbas, whose Fatah movement lost control of the Gaza Strip to Hamas in June, is seeking a document that deals in detail with the issues of borders and the future of Palestinian refugees.

Israel wants a less specific document and rejects Abbas’s call for a schedule for addressing issues and implementing any deal.

Disagreement between Israel and the Palestinians on the content of the document, which negotiating teams are drawing up to serve as a basis for the planned summit has been seen as a possible cause for delaying it.

Abbas also said Israeli actions on the ground, such as recent orders to confiscate Arab land in villages outside Jerusalem were “getting in the way of efforts to reach a substantial document to submit at the meeting”.

Livni, who heads the Israeli negotiating team, said Israel wanted “to reach understanding on the widest possible common ground in the time available”.

Asked about Palestinian accusations that the Israeli negotiating team was not serious about the talks, Livni replied: “I am not going to participate in this blame game.”

She said Israel was prepared to compromise, but did not say how, adding she hoped the Palestinians would compromise too.

“The idea is not to raise expectations that can lead to frustration and to violence, because we need to learn from past experience,” she said.

Earlier in the day, Rice toured Bethlehem’s Church of the Nativity, lit a candle and voiced hope religion could be a force for reconciliation in the region.

“Being here, at the birthplace of my Lord and Saviour, Jesus Christ, has been a very special and moving experience,” Rice, the daughter and granddaughter of Christian clergymen, told reporters after visiting the church.

Asked for her impressions of the barrier through which she entered the city and which Palestinians regard as a symbol of occupation, Rice said she had found it interesting and “sometimes sobering”, to hear about the problems Palestinians deal with but added: “Let’s be real. There is a security problem. No one wants to have barriers.” 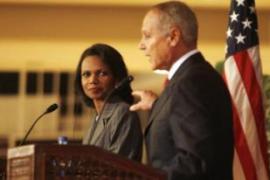 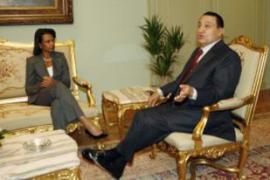 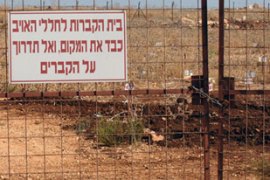 Israeli’s remains exchanged for the bodies of two Lebanese fighters at the border. 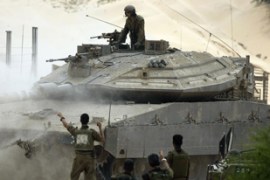