Blair has said that the UK’s relationship with Saudi Arabia was “vitally important” in terms of counter-terrorism and support in the Middle East”.
But analysts have questioned Blair’s claim that the investigation put at risk national security interests.
Some analysts have suggested Saudi Arabia was unlikely to abandon counter-terrorism co-operation and intelligence-sharing arrangements with the UK over the issue, saying that this would not be in Saudi Arabia’s interest.
One regional analyst was reported by Reuters as saying: “Traditionally, the Saudis have had one of the weaker intelligence set-ups in the region and have relied on the Americans and Brits to tell them what’s going on.”
Many in the British defence industry, however, believe the probe might have driven Saudi Arabia to transfer its defence contracts to France, which had earlier struggled in its bid to supply Saudi Arabia with French Rafale fighters.
The Eurofighter deal is thought to be worth more than £10bn ($19.6bn).

In May 2004, BAE Systems was the subject of allegations that it had won the deal by paying £60m of bribes from a slush fund to members of the Saudi royal family.
Later BAE Systems confirmed the Serious Fraud Office (SFO) was investigating allegations of corruption.
Lawyers for BAE Systems called for the bribery inquiry to be halted on public interest grounds.
“Blackmail”
The Liberal Democrats, an opposition political party, accused the government of giving in to “blackmail”.
Lord Goldsmith, Britain’s attorney general whose duties include overseeing the UK’s anti-fraud bodies, had said that the case was dropped following representations “concerning the need to safeguard national and international security”.
Goldsmith told the BBC that he judged the investigation would not succeed.
The investigation by the Serious Fraud Office (SFO) has already cost more than £2m.
The SFO has seen its budget grow in recent years while its conviction rate has fallen to 57 per cent.
OECD convention
Britain is a signatory to an Organisation for Economic Cooperation and Development (OECD) convention stating that investigations should not be influenced by national economic interest or the potential effect of relations with another state.
The OECD is reported to be considering a corruption inquiry into the situation.
British business earns about £5bn a year from defence exports and a quarter of that comes from Saudi Arabia.
Shares in BAE Systems rose by more than six per cent with the scrapping of the corruption inquiry.
Source : Al Jazeera, News Agencies 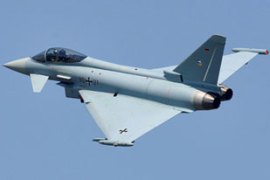