The Muslim Brotherhood is the country’s largest opposition group, with 88 members in the 454-seat lower house of parliament.
Abdel Moneim Mahmoud, a Brotherhood official, said the sweep took in 180 students from the university’s halls of residence, including Suhaib Gawdat el-Malt, whom he called the head of the free students union at the university.
Another prominent detainee is Ayman Abdel-Ghani, who runs the organisation’s student section at the university, and three members of the teaching staff, he said.
The government refuses to recognise the Muslim Brotherhood and the police frequently harass its members by detaining them without charge, sometimes for months at a time.
But the Islamist group does maintain an office and is able to organise some events within limits.
Source: News Agencies 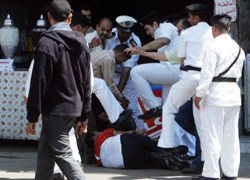