Yiwu, China – China is expected to have the world’s largest Christian community in the world within two decades, although Christmas remains a minor festival in the secular country. However, when it comes to commerce, the country’s economy thrives on the holiday seasons.

Around 60 percent of the world’s Christmas decorations come from factories surrounding Yiwu, in Zhejiang Province, a little more than an hour from Shanghai on the country’s high-speed rail.

In the Festival Arts subdivision of the Yiwu International Trade Market, every day feels like Christmas.

Here, in what is actually only a tiny corner of the world’s largest wholesale market for small commodities, aisle after aisle of large cubicles display an array of holiday decorations, from Santa Claus masks to stockings, artificial Christmas trees and metallic-coloured tinsel.

These booths are mini showrooms for bulk purchase for global export.

“We sell most of our trees to the United States: gaudy ones with flashing lights,” says Reng Guoan, general manager of the Sinte An Christmas tree factory, which manufactures more than a million artificial trees each year.

“The English like more traditional-style trees that aren’t electric. Australians don’t really buy artificial trees. They can just go out and cut one down.”

The workforce dedicated to Christmas decorations in Zhejiang, China’s wealthiest province, mainly consists of migrant workers from poorer areas around the country. In the dimly lit basement of the Xin Shua tinsel factory, Grandma Wang, 65, bunches reams of colourful tinsel into cardboard boxes.

“The more I pack, the more money I get,” says Wang, who is paid less than a penny for each bunch of tinsel she tags together by hand. “If there’s work, then we’ll work every day.”

“The busiest season for Christmas decorations is June and July,” says Guoan. “Apart from Chinese New Year, we make trees every day – even on Christmas Day.” 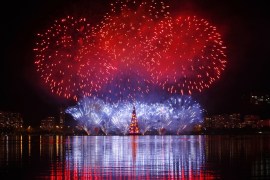 Christmas around the world

From floating trees in Rio to a vigil in occupied Bethlehem, Al Jazeera showcases the diversity of celebrations. 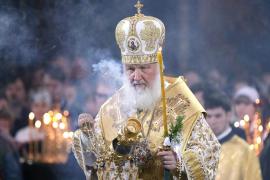 Millions of Orthodox Christians around the world – mostly in Eastern Europe – mark the birth of Jesus.