In my five years as a journalist, I’ve seen a fair share of tragedy

I’ve reported from the site of a deadly 2018 tsunami; inside a morgue filled with charred corpses; in front of an erupting volcano; in the middle of a refugee camp. Each of these situations brought with it its own particular horror, yet none prepared me for Indonesia’s deadly haze.

The annual smog comes from plantation and forest fires which have burned this year since July, blanketing parts of Indonesia, and tainting the sky first orange then blood-red.

These kinds of fires have raged every year since the 1990s, and are usually the result of plantations setting land on fire to clear it for replanting. It can also be caused when the jungle is set alight so other crops such as palm oil or acacia can be grown instead. As the flames ravage the already parched land, they set fire to neighbouring fields and jungle, which in turn burn out of control.

To call the results of the fires “smoke” would be too kind, it’s a toxic cocktail of tar, ash, pesticides and carbon monoxide that envelopes everything.

I experienced the haze before I’d even landed in Jambi on the island of Sumatra – one of the worst-affected areas in the country. As we made our descent, the cabin filled alarmingly with the smell of acrid smoke. There was almost zero visibility. It was, however, a very brief taste of what was to come.

I was there for three days, admittedly in the worst-hit parts of the province and often without wearing my mask (simply because it’s impossible to conduct interviews with an N95 clamped over your nose and mouth), but within a few hours of arriving in Jambi I felt decidedly unwell.

My chest felt like someone was sitting on it, my throat like I’d just swallowed a pile of twigs. I started gagging and choking on the fumes. My eyes itched and stung in equal measure. I broke out in a rash.

While my symptoms were unpleasant, we still have no real data on how the haze affects the people who have to live in it for sustained periods.

Every year there are deaths. They often involve the elderly, young children or those with respiratory issues such as asthma, but because it’s often difficult to prove a direct link to the haze, or because the health effects sometimes show themselves years later, we will probably never know how many it has killed.

I was, of course, one of the very privileged. My trip to Jambi wasn’t long. Local communities have been overcome by the haze for almost two months. Yet despite their prolonged exposure to the smog, they lack the most basic medical equipment.

On my first day in Jambi I wore one of the standard-issue green face masks handed out at medical clinics which are widely reported to offer almost no protection.

On the second, an environmental NGO, WALHI Jambi, gave me an N95 – designed to protect construction and industrial workers and something akin to gold dust in Jambi – which had been sent from Jakarta. WALHI facilitated my trip to the worst-hit hotspots and handed out 90 masks to locals along the way.

There was no obvious sign of personnel from Indonesia’s police force, army or disaster mitigation agency at any point on the two-hour drive from Jambi City to Desa Catur Rahayu.

In addition to how awful the haze makes you feel and the inadequate access to basics such as masks and oxygen tanks, there is a second issue that is little discussed: the psychological effect of being in a permanent fog of toxic fumes.

It is almost indescribable in its cruelty. There is nowhere to go and nowhere to hide.

The haze is the perfect tormentor. It gets everywhere: under doors; through air-conditioning units; into car-ventilation systems; inside the cabin of your plane. It even gets into the toilets, the water of which is permanently stained orange.

In the field, the haze continues to terrify. On the road to Desa Catur Rahayu – a village close to the worst hotspots, the sky slowly turned sepia, then orange, then red. The pictures don’t do it justice. The only way to describe it is apocalyptic. It felt like the end of days.

At night there is still no escape. The haze hangs below street lamps, slowly suffocating you. The mental anguish this causes is in many ways worse than the actual physical effects.

Perhaps as a coping mechanism, there were moments of humour. Like when locals scaled the statues welcoming visitors to Jambi and strapped masks across their faces. It’s a reminder that people can still be sanguine in the face of such terrible adversity.

Still, at the end of three days, I couldn’t get out of Jambi fast enough. It was unbearable. Once home, the photographer and I both came down with a fever, something a local doctor had warned us would happen as our bodies tried to fight the effects of the haze.

Many residents can’t abandon their homes and businesses, and even if they could, most of Jambi province is shrouded in poisonous fog – as is much of wider Sumatra.

This is perhaps the true horror of Indonesia’s haze; for so many, there is no escape. 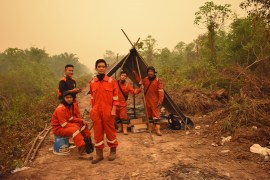 The government says 6,000 troops have been deployed but in Jambi farmers and security guards are on the front lines. 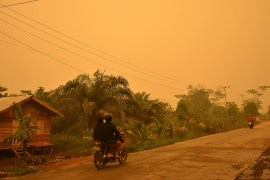 ‘When is this going to end?’: Indonesians shrouded in toxic haze

Fires, started on plantations, have been burning since July sending air pollution to hazardous levels. 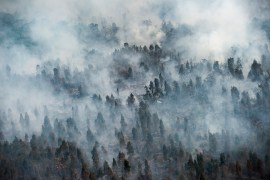 Toxic haze spreads across Indonesia and into neighbouring Malaysia and Singapore forcing schools to shut.