Doha, Qatar – There have been renewed calls for Qatar to address and review its treatment of migrant workers after a new Amnesty International report revealed that “hundreds of migrant workers” have been forced to give up on “justice” and return home “penniless” since March 2018.

Qatar and its labour laws have been under the spotlight ever since the country was named the host of the 2022 FIFA World Cup. Its government has pledged to resolve labour disputes in the run-up to the tournament.

In the report published on Thursday, Amnesty said it followed the “search for justice of more than 2,000 people working for Hamton International, Hamad bin Khaled bin Hamad (HKH) and United Cleaning after the companies stopped paying their wages for several months, citing financial difficulties”.

The companies then ceased operations and ended the contracts, prompting at least 1,620 of these workers to submit complaints to the Committees for the Settlement of Labour Disputes.

“While some of them were eventually given part of what they were owed by their employers in exchange for dropping their cases, most went home with nothing,” said the report.

The committee received more than 6,000 complaints last year, according to the report which added that most of them had not been resolved at the end of the year.

“Despite the significant promises of reform which Qatar has made ahead of the 2022 World Cup, it remains a playground for unscrupulous employers,” said Stephen Cockburn, Amnesty International’s deputy director of global issues.

“Migrant workers often go to Qatar in the hope of giving their families a better life. Instead, many people return home penniless after spending months chasing their wages, with too little help from the systems that are supposed to protect them.”

In a statement to Al Jazeera in the wake of the Amnesty report, Qatar’s Government Communications Office said, “Qatar has made substantial progress on labour reforms and it continues to work with NGOs, including the International Labour Organization, to ensure that these reforms are far-reaching and effective.”

“Any issues or delays with our systems will be addressed comprehensively. We have said, from the outset, that this would take time, resources and commitment,” the statement said.

In August, there were calls for Qatar to completely “remove the power imbalance between employees and the employers” after at least 5,000 workers took to the streets to protest salary delays and working conditions.

Employees of Iskan and Tashgeel, working on construction projects throughout Qatar, staged peaceful strikes on August 4 and 5 near their accommodation camps in Shahaniya, just over 30km outside the capital, Doha.

Protesting workers, mostly from Bangladesh, told Al Jazeera that in addition to poor living conditions, they had not been paid for four months, the companies had failed to renew their work permits – making their status in Qatar illegal – and were not given the required letters that would allow them to switch employers.

Under Qatar’s “kafala” (Arabic word for sponsorship) system, migrant workers must obtain their employers’ permission – a no-objection certificate (NOC) – before changing jobs, a law that rights activists say ties them with their employers and fuels abuse and exploitation.

“We protested for six hours in order to demand our rights and salaries that amount to 1,200 Qatari riyals [$329] a month,” one of the Iskan workers, who was part of the protest, told Al Jazeera.

“We have to look after ourselves. The reason we came to Qatar was to earn money and support our families back home,” said another worker. “What’s the point of being here if we’re not getting that?”

The government said an investigation was launched following the protests and, in addition to authorised signatories of the two companies being arrested, the “outstanding salaries of all workers were paid in full”.

“The findings of the investigation confirmed that salaries had been delayed following a period of negative cash flow at both companies, caused by non-payments elsewhere in the supply chain,” a government statement said.

The Iskan workers interviewed by Al Jazeera confirmed the payment but said there were deductions and the company still owed them money. They said they were “glad that the government intervened and got us our dues” before adding that there were “pending issues that needed resolving”.

The workers said no officials from the company came to visit the camps following the protests.

Iskan and Tashgeel did not respond to requests for comment from Al Jazeera on the allegations.

Both the companies are also providing the workforce for the construction of the 2022 World Cup stadiums. Tournament organisers told Al Jazeera that 203 workers from the two companies “currently engaged on FIFA World Cup Qatar 2022 projects were not part of the strike action taken”.

But it did not confirm whether those employees had unpaid dues.

“The Government of Qatar places the utmost importance on strengthening the rights of its guest workers and ensuring that all companies respect these rights and adhere to Qatar’s labour laws,” added the government statement issued last month.

In response to an earlier Amnesty International report warning that Qatar was “running out of time” to stamp out labour abuse, the gas-rich peninsula in the Gulf promised to treat labour reforms as “a journey and not an end in itself”.

Last year, Qatar announced it was abolishing the need for exit permits for non-domestic migrant workers. It also did away with the need for an NOC if the migrant worker completed the contract duration or finished five years in the event of an undefined time period in a contract.

However, rights groups have demanded wholesale reforms, including the abolishment of the kafala system.

“I don’t think Qatar has gotten far enough [with the labour reforms],” Hiba Zayadin, Gulf researcher for Human Rights Watch (HRW), told Al Jazeera. “What’s needed to really see improvements on the ground is the abolishment of the kafala system.

“The introduction of minor reforms is not able to tilt the power imbalance between the employee and the employer. This allows employers to have several tools at their disposal that they can use to keep workers in those conditions.”

In the Asian Town area of Qatar’s industrial area, a security officer told Al Jazeera his colleagues staged a small protest demanding their overtime payments which were held back for three months.

He said all his colleagues worked 12-hour shifts every day, amounting to 72 hours a week. Qatar’s labour laws stipulate a maximum 48 hours of work a week without overtime, reduced to 36 hours during the holy month of Ramadan.

“To ask for your right in this country is to have your ticket back home issued,” he said. “I was promised a higher salary in my country but was told to sign a different contract when I arrived in Qatar. I had taken a huge loan to pay the agent back home in order to get this job, so I had no choice but to sign it.”

Other migrant workers that Al Jazeera spoke to shared similar concerns, including salary delays, unlawful termination and stories of poor accommodation where “five to six people shared a room and there was no place to even walk”.

Qatar’s labour ministry has welcomed workers to lodge their complaints with it, but the majority finds it risky to take that course for fear of serious repercussions from their employers.

“There’s definitely a lack of faith in the system and in the available avenues,” Zayadin said.

“Which is why the government needs to address the NOC issue. Once you reduce the tools for an employer to retaliate, the workers will be less afraid of coming forward as their immigration status will not be connected to the employer they’re are complaining about.”

*No workers wanted their names published in the story. 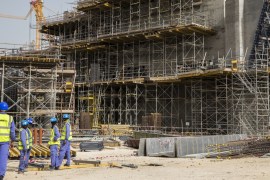 Football World Cup 2022 hosts vow to tackle ongoing labour abuse after Amnesty report warned it was running out of time.