Kirkuk, northern Iraq – It’s lunchtime in the Iraqi city of Kirkuk and a crowded restaurant bustles with boisterous men and the loud clinking noise of cutlery and plates. Three members of the leading Kurdistan Democratic Party (KDP) are deep in conversation in advance of a rally in favour of independence for Iraq’s Kurdish region.

“Our dream is to have Kirkuk at the heart of Kurdistan,” explains Hemin Abdullah, 35, originally from Kirkuk.

Abdullah and his two colleagues have been travelling through the Kurdish region and the disputed areas in a bid to convince voters to say ‘Yes’ to the Kurdistan Regional Government’s (KRG) planned referendum on independence.

READ MORE: Kurdish referendum in Iraq – What and where?

Iraq’s disputed territories have long been a source of contention between Baghdad and the Kurds as both lay claim to them. Kirkuk, for example, survives on Baghdad’s payroll yet is under Kurdish military control.

Following weeks of apparent vacillation on behalf of Kurdish President Masoud Barzani and widespread international opposition to the referendum, Barzani addressed a crowd of 40,000 in Erbil on Friday and called on voters to head to the polls on Monday.

Opposite Abdullah, Fazel Mohammad Latif, 70, is adamant that the referendum will be carried out democratically and that the “Yes” vote will prevail.

“We’re positive we’ll win because, with the Peshmerga, there has not been killing of people based on ethnicity, because their rights are preserved,” said Latif in reference to Peshmerga forces taking over Kirkuk in 2014 following the Iraqi military’s withdrawal in the face of an Islamic State of Iraq and the Levant (ISIL) attack.

Yet last November both Human Rights Watch and Amnesty International released damning reports alleging that Kurdish forces had “carried out a wave of attacks, demolishing the homes and driving out hundreds of Arabs from Kirkuk”.

“We respect diversity, we want this diversity in Kirkuk, but under the name ‘Kurdistan’,” he added as a gaggle of locals outside the restaurant walked down the searing afternoon road chanting slogans and waving sun-emblazoned flags.

But while the Kurdish enclave celebrates with colourful rallies and seemingly endless supplies of flags, the residents of the disputed city of Kirkuk which was controversially included in the referendum, are not as easily persuaded by the Kurds’ long-standing dream of independence.

The oil-rich province lies outside of the official borders of the Kurd’s semi-autonomous territory and is home to Kurds, Arabs, Turkmen and Christians – many of who rebuff the idea that the city could be engulfed by a nascent independent “Kurdistan”.

These groups also claim a historical attachment to Kirkuk, with the Kurds referring to it as the heart of a potential “Kurdistan”.

“Kurds, have always considered Kirkuk as a cornerstone of their cause in Iraq and have made joining Kirkuk into their semi-autonomous region a major priority,” explained Khogir Wirya of the Middle East Research Institute (MERI) think-tank.

“Likewise, Turkmens accord Kirkuk a similar affinity. To me, the Kirkuk issue is more of an identity struggle than an economic one,” he continued.

The myriad of claims on Kirkuk coupled with the upcoming referendum have led to heightened tensions among factions, an alleged increase in security forces and a nighttime curfew following the killing of a Kurdish man by a member of the Turkmen community last week.

Unlike the flurry of excitement in Kurdish-majority cities like Erbil and Duhok, Kirkuk’s roads are a little quieter than usual as residents take stock of the situation. Some families are weathering the possible storm in neighbouring towns and cities, while others have been collecting extra food items like flour and rice.

“This could develop into a sectarian war,” said Deputy Head of the Iraqi Turkmen Front (ITF) Hassan Toran, whose party is set to boycott the referendum by not voting.

“I’m afraid of violence, I’m afraid of [conflict] between sects and another between the Popular Mobilization Forces (PMF) and the Peshmerga,” said Toran in reference to Kurdish forces and the estimated 8,000-strong state-recognised armed group of predominantly Shia fighters who joined the current government in the fight against ISIL just south of the city.

According to Toran, the inability of the KRG to pay the salaries of its own state employees makes breaking away from Baghdad financially suicidal and simultaneously paves the way for an increase in ISIL (also known as ISIS), attacks.

“ISIL benefits from the rise in tensions,” said Toran, sitting at his party’s headquarters in Kirkuk.

“People are afraid that if the referendum happens something bad will happen, they’re staying indoors, saving up money,” explained Hamoud, 28, from behind the counter of his mobile phone shop.

The young member of the Sunni Arab al-Jabouri tribe explained that the often-busy street he works on has been largely empty since the second week of September and that his business had taken a hit because of it.

“If the referendum happens what do we do if the PMF come in and fight us? Or what if the referendum succeeds and the [Kurdish] government says no more Arabs and kicks us out?” he questioned.

Hamoud has stopped leaving expensive merchandise in his shop overnight and has stocked up on flour and rice as a means of precaution.

Mohammad, 28, has also been stocking up on bags of flour in his home. “We only want security and safety – whether it’s the PMF or the Peshmerga,” says the young Turkmen lawyer.

But Mohammad isn’t convinced that joining the Kurds would benefit his city. “The first thing is the economy – if we go to the KRG they wouldn’t provide enough salaries,” he explained.

Although Mohammad admits to a noticeable improvement in security following the Peshmerga’s deployment to Kirkuk in 2014, he shies away from saying whether he will vote on Monday or not.

One shopkeeper from ISIL-held Hawija was vocal about his unease as he discussed the upcoming referendum in an overcrowded bazaar. “You see all the flags they have distributed? It’s not a comfortable situation. We’re displaced from Hawija and we’re worried there could be conflict,” he admitted.

In front of him, two Kurdish men eavesdropped eerily into the conversation: “The situation is fine, why are you saying that?” one of them asked.

In a small shop at the feet of the Kurdish flag-clad citadel, a young Arab man says he is worried about what his fellow Kurds might do next. “We’re brothers, and the most important thing is to do things rationally. I don’t care if they take Kirkuk, as long as it’s done in a peaceful way,” said 25-year-old Mustafa Mohammad.

Like most Iraqis, Kirkuk’s residents are largely adamant that there are no existing hostilities between the various communities, but that the problem lies within the political elite. Yet as the referendum nears and tensions rise, some parts of Kirkuk’s complex social fabric could begin to fray.

“Arabs will be able to vote freely but they will vote with fear,” said Miqdad Faidhulla, a member of the Iraqi Islamic Party responsible for the Kirkuk offices.

Faidhulla, a Kurd from Kirkuk, says the referendum should only be carried out in a constitutional and legal manner.

“I would like to have a country but not a country with bloodshed,” said Faidhulla.

“If you build a country with bloodshed, it will not be stable and you will not have economic development.” 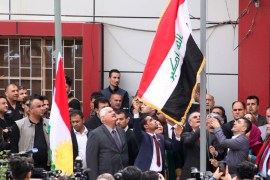