When nearly 1,500 Palestinian prisoners declared an open hunger strike on April 17, protesting about unfair and degrading conditions in Israel jails, much of the US mainstream media ignored them.

There was a single exception. The New York Times allowed the leader of the strike, a top Fatah leader, Marwan Barghouti, to share with a wider audience the reasons behind the strike.

However, the backlash was instant.

So-called Honest Reporting, a pro-Israel media watchdog whose tagline is, oddly enough “defending Israel from media bias”, summarised much of the outrage that resulted from the Times’ decision to allow Barghouti to share his and the grievances of 6,500 Palestinians in Israeli jails.

Under the title “Marwan Barghouti: New York Times Sanitises a Terrorist”, the media monitoring platform ran a synopsis of many reactions by Israeli officials and pro-Israeli editors and writers protesting about the supposedly heinous act.

Seemingly it had escaped this pro-Israel media watchdog that the New York Times, like most US mainstream media largely accepts Israel’s discourse on Palestine uncontested, had itself taken a pro-Israel line since the very start of the conflict.

Barghouti is a “terrorist” from an official Israeli point of view, exactly as every freedom fighter, Palestinian or South African or anyone else who had dared to fight military occupation and colonisation. He or she was almost always deemed a “terrorist” by his or her jailers.

And like other colonial powers in the past, Israel expects, in fact demands, that its unfair designations of the very people it customarily oppresses be embraced and mimicked by the rest of the world.

If seen from the perspective of disaffected, imprisoned Palestinians, the reality suddenly changes.

Militarily occupied Palestinians rightly deem Israel a “terrorist state” and the Zionist ideology that has justified the ethnic cleaning of Palestinians and the occupation of their homeland a ‘terrorist movement’.

Such a view hardly registers in mainstream, especially US, media.

Despite the rising sympathy for Palestine and Palestinians in many parts of the world, Europe and North America included, the media are still following the same line as in the past, with subjugated Palestinians ignored or demonised and militarily powerful Israel painted in the role of the victim, and celebrated for its alleged moral triumph as a democracy among Muslim “hordes”.

Of course, not all media operate with such low journalistic and moral standards. There are still voices, however marginalised, that continue to challenge that galling paradigm.

They refuse to accept how “objectivity” is selectively applied on some nations, but excludes those who are perceived as “American allies”, whether self-declared democracies, like Israel, or outright dictatorial regimes.

It would have been far more productive, and humane to sympathise with hunger-striking men and women in Israeli jails, mostly sentenced in kangaroo courts or held indefinitely with no trials at all or any due process.

An inquisitive journalist should inquire as of why thousands of prisoners are on hunger strike in the first place and should attempt to understand how such an act is part of a larger political and humanitarian context that has affected millions of occupied and besieged Palestinians.

Is it possible that many in the media are wary that such dialectic could lead to more painful questions and equally uncomfortable answers?

One such uncomfortable truth is that Gaza is the world’s largest open prison. The West Bank is a prison, too, segmented into various wards known as areas A, B and C.

East Jerusalem is cut off from the West Bank, and those within the West Bank are themselves separated from each other.

Palestinians in Israel are treated slightly better than their brethren in the occupied territories, but still subsist in degrading conditions compared with the first-class status given to Israeli Jews, purely on the basis of their ethnicity.

That is why the issue of prisoners is a very sensitive one for Palestinians – being a literal as well as metaphorical representation of all that Palestinians have in common, and the various facets that characterise the very meaning of a Palestinian existence.

In fact, the protests igniting across the Occupied Palestinian Territories to support 1,500 hunger strikers are not merely an act of ‘solidarity’ with the incarcerated and abused men and women who are demanding improvements to their conditions.

They are, in essence, protests against the very reality of Palestinian life -an Israeli created status quo.

The prisoners held captive in Israeli jails are a depiction of the life of every Palestinian, trapped behind walls, checkpoints, in refugee camps, in Gaza, in cantons in the West Bank, segregated Jerusalem, waiting to be let in, waiting to be let out. Simply waiting.

The 6,500 prisoners in Israeli jails include hundreds of children, women, elected officials, journalists and administrative detainees, who are held without charge and no due process. Yet, these numbers alone hardly convey the reality that has transpired under Israeli occupation since 1967.

According to prisoners’ rights group, Addameer, more than 800,000 Palestinians have been imprisoned under military rule since Israel commenced its occupation of Palestinian territories in June 1967.

That is 40 percent of the male population of the occupied territories. Israeli jails are, therefore, prisons within larger prisons.

But to be fair, there is another important dimension to the story of the prisoners than the Israeli occupation. The ongoing Palestinian prisoners’ hunger strike is rooted in a Palestinian political context, as much as it is in Israeli oppression and violations of international law.

The strike and the public mobilisation that has thus far unified Palestinians from all backgrounds is largely championed by a branch of Fatah that has been purposely sidelined for years.

Leading the hunger strike is Barghouti, who is by far the more popular figure within Fatah than its current leader, the ageing Mahmoud Abbas. (No wonder why western mainstream media is trying to discredit Barghouti!)

Despite being president of the Palestinian Authority (PA) and head of the Palestine Liberation Organisation (PLO), Abbas’ reign is characterised by expired mandates and little popularity. In fact, his leadership has been largely predicated on several pillars: US-Western funding, “security coordination” with Israel and Arab backing.

The reality is that the Palestinian people have rarely ever been a focal point within Abbas’ political equation.

Now over 80-years-old, Abbas is desperate to ensure that the future of the party will continue to favour his brand of politics and sideline his rivals. These include not only the Hamas movement, but also the Barghouti-led branch of Fatah.

The sad and painful reality is that while the status quo is bleak for most Palestinians, it is beneficial to a few. Some had benefited, becoming wealthy after the Oslo Accords was signed. The PA is itself a direct outcome of Oslo, and can only survive as long as the Oslo “wisdom” – “peace process”, “two-state solution”, and so on -prevails.

The reality is that Fatah itself had never recovered from its post-Oslo fiasco and the hurried rearranging of the party, its values, cadres and vision.

Meanwhile, the majority of Palestinians are suffering: they see no political horizon, they are getting poorer and jobs are harder to come by, the Israeli occupation is more enriched, the Arabs are too preoccupied with their own wars and conflicts and the Palestinian leaderships are busy squabbling over meaningless titles, money and hallow prestige.

While former Palestinian leader, Yasser Arafat, was holed up in his office in Ramallah for years, until his death in November 2004, Abbas is free to travel. While Israel can, at times, be critical of Abbas, he rarely deviates far from the acceptable limits set by the Israeli government.

This is why Abbas is free and Barghouti is in jail.

If the PA truly cared about prisoners and the wellbeing of Barghouti, Abbas would have busied himself with forging a strategy to galvanise the energy of the hungry prisoners, and millions of his people who rallied in their support.

Unsurprisingly, this is not the case.

“Abbas is publicly supportive of the strikers, but in private he is said to want the protest over as quickly as possible,” wrote Jonathan Cook, the award-winning journalist based in Nazareth. “Reports … revealed that he had urged Egypt’s President, Abdel Fattah el-Sisi, to intercede with America and Israel to help.”

Mass mobilisation has always scared Abbas and the PA. It is too dangerous for them, because popular action often challenges the established status quo and could hinder his Israeli-sanctioned rule over occupied Palestinians.

Not all Fatah supporters are happy with Abbas’ subservience. The movement’s youth want to reassert a strong Palestinian position through mobilising the people; Abbas wants to keep things quiet.

Amos Harel argued in Haaretz that the hunger strike, called for by Barghouti himself, was the latter’s attempt at challenging Abbas and “rain[ing] on Trump’s peace plan”. However, US President Donald Trump has no plan. He is giving Israeli Prime Minister Benjamin Netanyahu carte blanche to do as he pleases.

His solution is: one state, two states, whichever “both parties like”.

But both sides are far from being equal powers. Israel has nuclear capabilities and a massive army, while Abbas needs to coordinate with Israel every time he wants to leave the occupied West Bank. In this unequal reality, only Israel decides the fate of Palestinians. Why then, should Palestinians be quiet?

Their silence can only contribute to this gross reality, their painful present circumstances where Palestinians are perpetually imprisoned under an enduring occupation, while their “leadership” receives both a nod of approval from Israel and accolades and more funds from Washington.

It is with this backdrop that the hunger strike becomes far more urgent than the need to improve the conditions of incarcerated Palestinians.

It is a call for Palestinian unity against factionalism and Israeli occupation.

“Rights are not bestowed by an oppressor,” wrote Marwan Barghouti from his jail on the first day of the hunger strike.

Dr Ramzy Baroud has been writing about the Middle East for more than 20 years. He is an internationally-syndicated columnist, a media consultant, an author of several books and the founder of PalestineChronicle.com. His books include “Searching Jenin”, “The Second Palestinian Intifada” and his latest “My Father Was a Freedom Fighter: Gaza’s Untold Story”. His website is www.ramzybaroud.net. 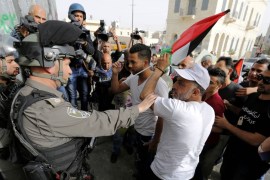 Palestinians on strike in solidarity with prisoners

General strike held in solidarity with hunger striking prisoners as Fatah party calls for ‘day of rage’ on Friday. 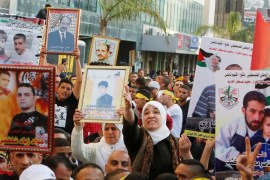